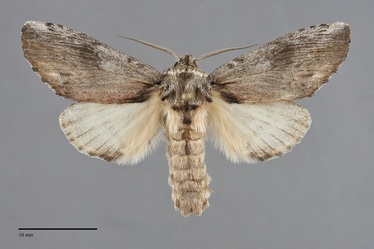 Oligocentria pallida resembles O. semirufescens but can be differentiated easily by its orange-brown color and black bar-shaped discal spot. Schizura concinna, another prominent moth, has similar wing color to O. semirufescens but has a stubbier forewing and more extensive dark brown and gray colors along its posterior area that extends to the outer wing margin.

This species is placed in the genus Oedemasia Packard in a recent check list of the New World prominents by Becker (2014).

Oligocentria semirufescens is found in forests throughout our region. It does not occur in xeric steppe habitats.

This species has a large range in North America. It occurs throughout the East, from Nova Scotia to Florida. Its range in the West is less well known, although it occurs in the Rocky Mountains.

This species is a generalist feeding on many kinds of hardwood trees and shrubs, particularly in the families Fagaceae, Betulaceae, Rosaceae, Aceraceae, and Salicaceae.

This species is probably single brooded and occurs from June through August in the Pacific Northwest. It is nocturnal and comes to light. Adults do not feed.