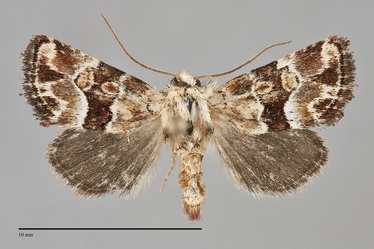 Euros osticollis is a very small moth (FW length 7 - 9 mm) that flies in wet seeps in southwestern Oregon during late summer. Its forewings have a harlequin-like pattern of red-brown, yellow, and white. The forewing is short and rounded. The basal and subterminal areas are yellow-tan posteriorly and red-brown anteriorly, and the apex is ochre-yellow. The median area and terminal area are darker red-brown, forming a large triangle in the terminal area opposite the cell. The antemedial and postmedial lines are white and black, white opposite the median area. The antemedial line is slightly irregular, oriented at a right angle to the axis of the wing. The postmedial line curves around the reniform spot, touching both ends of the spot and nearly perpendicular to the posterior margin below the spot. The subterminal line is light ochre, wide and jaggedly irregular. A black terminal line is present. The fringe is dark gray, with the base weakly checkered with light yellow. The orbicular and reniform spots are outlined in black, filled with yellow peripherally, and light red-brown centrally. The orbicular spot is small, oval, touching the antemedial line. The reniform spot has a straight medial border; the postmedial line forming the lateral border. No claviform spot is evident. The hindwing is even dark gray, including the fringe. The head and thorax are gray-yellow ("bone-white") with diffuse red-brown edge on the posterior tegulae. The male antenna is filiform.

This species is easily identified by its small size and colorful strongly mottled pattern. It is only likely to be confused with Euros cervina, which also occurs in southwestern Oregon. This species has a similar pattern but is orange-tan without yellow and dark red-brown colors.

This species has only been found in hanging bogs within open serpentine barren habitats at low elevations in the Siskiyou region of southwest Oregon.  This unique habitat includes many rare and endemic plants such as the California pitcher plant (Darlingtonia californica) and California lady slipper orchid (Cypripedium californicum).

This species has not been found outside the Pacific Northwest but is likely to occur in similar habitats in northwestern California.

No information is presently available regarding larval foodplants of this species. It is probably a borer in wetland grasses (Poaceae) or sedges (Cyperaceae)

The flight period of this species is late July and the month of August. It is nocturnal and comes to lights.