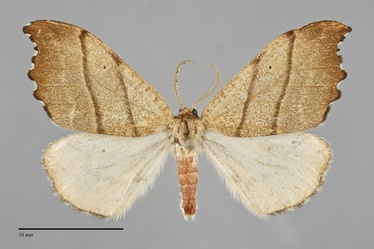 Drepana bilineata is a medium-sized, hook-tipped moth (FW length 17–20 mm) that flies in forests from late spring through summer. The forewings are light tan with uneven margins. The forewing shape is distinctive, with a sickle-shaped apex and unevenly scalloped outer margin. The color is dried-leaf-brown, darker toward the outer margin, with faint mottled striations and a black discal dot. The dark gray-brown antemedial and postmedial lines are straight and do not extend to the apex. The terminal line is dark brown, and the fringe is checkered brown and white. The discal spot is a round black dot. All other markings are nearly obsolete. The hindwing is much paler than the forewing with a faint gray postmedial line, black discal spot, and dark brown fringe. The head and thorax are slightly darker than the forewing. The antennae of both sexes are bipectinate, with longer branches in males.

Drepana bilineata is easily recognized by its broad light yellow-tan or gray-tan wings with an uneven outer margin and hooked tip. The most similar species, Drepana arcuata, differs in having a smoothly curved outer margin and a single prominent forewing line that extends to the hooked apex.

The larva is mottled brownish green with knobby dorsal scoli or tubercles. It is illustrated by Powell & Opler (2009).

This species is widely distributed in coastal rainforests of both the Coast Range and along the west slope of the Cascades at low to middle elevations, but is never common.  It also occurs along creeks of the Rocky Mountain region and in boreal forest in British Columbia. It is rare in northwestern Oregon.

Drepana bilineata is widely distributed in forests in the Pacific Northwest but is less common than Drepana arcuata. The range extends north through central and eastern British Columbia as far north as the Peace River region near the border with Alberta.  It extends from southwestern British Columbia to southern Oregon along the Coast, and to northeastern Oregon in the Rocky Mountain region.

This species occurs across boreal North America from coast to coast. In the east it is found as far south as New Jersey and Michigan. It is limited to coastal northern California to the south of the Pacific Northwest.

This species is a foodplant specialist feeding on various alders (Alnus spp.) and birches (Betula spp.) in the Betulaceae.

This moth has a long flight season from late spring until early fall. Collection dates suggest two broods in the Pacific Northwest with peak abundances in late spring and August.  It is nocturnal and comes to lights.