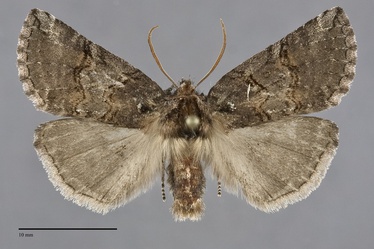 Ceranemota crumbi is a small to medium-sized Ceranemota species (FW length 14–17 mm) that flies in western Washington and Oregon and in the Blue Mountains of Washington during late fall. Its forewing, which is dark brown and gray in color, appears relatively short and broad. The apex is slightly pointed, and the outer margin is smoothly convex and weakly scalloped. The color is brassy brown-gray, lighter gray in the terminal area, especially at the apex. A thick but short basal dash of tufted black and white scales is the most prominent marking. The transverse lines are usually indistinct and inconspicuous, but some specimens have undulating black and brown antemedial and postmedial lines. The subterminal line is light gray, diffuse or evenly wavy, except for the apical portion, which is black and sharply scalloped. The median line is black and scalloped. The fringe is gray, brassy brown-gray, or pinkish gray, with weak, dark gray checkering. The orbicular spot is a black dot, sometimes absent, while the other spots are absent. The hindwing is dark brown-gray with faint darker markings. The hindwing fringe is variable, light pinkish gray to dark gray. The thorax is dark brown, with slightly lighter gray-brown on the central tegulae. It is tufted, as in other Ceranemota species. The male antenna is biserrate.

C. crumbi can be identified by its late fall flight, its predominantly western range, its relatively small size, and its brassy brown-gray color with black and white basal dash and punctate orbicular spot. The most similar species is Ceranemota improvisa, with which it flies. C. improvisa has extensive light greenish gray areas on the forewing that are lacking in C. crumbi.

This species appears to be fairly common in both coastal rainforests and mixed hardwood forests at low elevations west of the Cascades, but is rarely collected because of its very late flight season.

Ceranemota crumbi is known from forests of western Oregon and the Washington Cascade Range. A single record of this moth from Dayton in Columbia County, Washington suggests that it might be more widespread but overlooked due to its late-season flight period.

This species appears to be a Pacific Northwest endemic.

This species is single brooded with a late fall flight. Most records are from late October to late November. It is nocturnal and comes to light and bait.