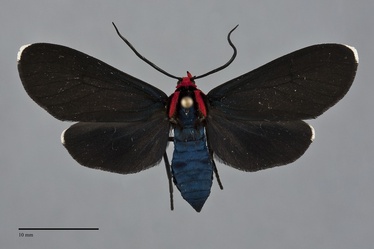 Ctenucha rubroscapus is a brilliantly colored black, blue, and orange day-flying moth from west of the Cascade Mountains. It is medium-sized (FW length 19 - 20 mm). The fore- and hindwings are similar, as they are black with a segment of white fringe at the wing apices. The head and tegulae are bright orange red, while the collar and central thorax are black. The abdomen is metallic blue.

Cisseps fulvicollis is similar, but has narrower wings, an orange head and collar, black tegulae, and translucent whitish gray hindwing base. Ctenucha virginica which occurs in northern British Columbia has an orange head and has black and blue tegulae.

Larva is black and densely covered with short tufts of white hairs.  It is illustrated by Miller & Hammond (2003).

This species only occurs at low elevations west of the Cascades.  It is common to abundant in coastal grasslands adjacent to the ocean, but isolated, sporadic colonies also occur in wet boggy meadows or wet prairie of the Willamette Valley.

C. rubroscapus is limited to low elevations west of the Cascade Mountains south of Chehalis in the Puget Trough of Washington. It is most common along the immediate coast.

Ctenucha multifaria has been recorded from western Oregon (Ferguson et al. 2000). We see no evidence for more than one species in the material examined for this project and list all records as C. rubroscapus.

The range extends further south through California to the Mexico border.

Adults are single brooded and have been collected from late June through September. They are most common in July and August. C. rubroscapus is diurnal and is collected by hand netting.  Adults nectar on composites such as goldenrod and tansy ragwort.