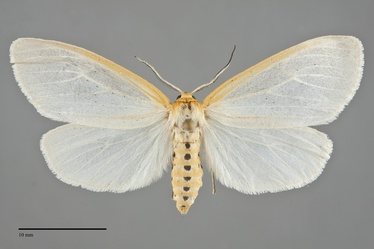 Cycnia tenera is a broad-winged, pale yellow and whitish, medium-sized (FW length 13–16 mm) tiger moth. The forewing is nearly uniform off-white with a light ochre yellow costa. A dusting of gray scales is present in the cell near the base of the wing, most prominently on the underside. The hindwing is unmarked off-white. The head, collar, and tegulae are the same yellow as the forewing costa, while the rest of the thorax is paler. The hindwing is slightly lighter yellow than the costa and thorax and is marked with several rows of black spots. The weakly bipectinate antennae are pale dorsally and black ventrally. The legs are mostly gray.

This species is most similar to Cycnia oregonensis, which has a slightly darker forewing with pale veins that lacks the gray dusting and yellow costa of C. tenera.

This species is widely distributed across North America extending to the northern Rocky Mountain region.  It occurs in low to mid elevation open habitats with dogbane, particularly in canyons and foothills in the Pacific Northwest.

C. tenera is found in southern British Columbia, northeastern Washington, Idaho, and extreme eastern Oregon. It is found in the northern Columbia Basin and Snake River Plain, but is otherwise absent from aridlands. It is absent from most of the western part of our region, including the east slope of the Cascade Mountains.

This species has a large range in North America. It is found throughout the east as far north as Nova Scotia. Records are fewer in the Rocky Mountains. It is nearly absent from further west, although Ferguson et al. (2000) show two isolated records from north central California and one from southeastern Arizona.

This species is a foodplant specialist, feeding on dogbanes (Apocynum spp.) and milkweeds (Asclepias spp.).

C. oregonensis occurs in the summer, with most records from June and July. It is nocturnal and comes to light.