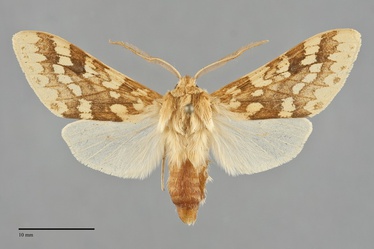 Lophocampa maculata is a common, medium-sized (FW length 20 - 24 mm), yellow and brown tiger moth found in forests throughout the Pacific Northwest. The forewing ground color is yellow. It is marked with warm brown, broad transverse lines and veins. These are usually partially fused to form confluent patches over large portion of the wing. The most distal brown markings often form a series of spots between the veins at the wing margin. The hindwing is unmarked light yellow. The head, thorax, and abdomen are slightly darker yellow to light tan. The relatively long antennae are orange-brown and bipectinate, much wider in males than in females.

This species is most similar to Lophocampa argentata in pattern. These species are easily separated by color since L. argentata is white and brown.

Mature larva is densely covered with hair tufts, black at the head and tail, red-orange in the middle of the body, and with scattered very long white hair tufts along the length of the body.  Younger larva is mostly orange with white hair tufts and lacks the black coloration.  It is illustrated by Miller & Hammond (2003).

This species is common to abundant throughout most of North America.  In the Pacific Northwest, it occurs in all types of forest habitats including coastal rainforests, mixed hardwood forests at low elevations west of the Cascades, and mixed hardwood-conifer forests at higher elevations in the mountains.  East of the Cascades, it is particularly common in moist riparian habitats along creeks and rivers.

L. maculata is common to abundant in low to mid elevation forests throughout the Pacific Northwest.

This species is widely distributed throughout Canada and the United States. It occurs between Labrador and North Carolina in the east and north central British Columbia and the Mexican border in the west.

This species is a foodplant generalist feeding on a wide diversity of hardwood trees and shrubs including Aceraceae, Fagaceae, Betulaceae, Salicaceae, and Rosaceae.

L. maculata is single brooded and occurs in the summer, most often in June and July. It is nocturnal and comes readily to light.