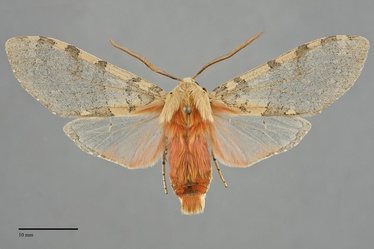 Pseudohemihyalea edwardsii is a large (FW length 27 - 31 mm), translucent, yellow- and rose-colored tiger moth found in association with oaks. The forewing is translucent ochre-yellow with a dusting of dark brown scales, solidly colored along the costa and posterior margin. The fairly broad transverse lines are gray, most evident at the costa and posterior margin and weak and diffuse elsewhere. The hindwing is translucent gray yellow with a rose flush medially and at the anal angle. The head and most of the dorsal thorax are ochre yellow, with a black dot at the base of each wing. The dorsal abdomen and posterior thorax are rose colored. The bipectinnate antennae are tan.

This is a distinctive species that is unlikely to be confused with any other species in our region.

This species is common to abundant in oak woodlands or mixed hardwood forests at low elevations west of the Cascades.

P. edwardsii is found throughout western Oregon wherever oak is found. It is restricted to the Columbia Gorge in the adjacent part of southern Washington.

Outside of the Pacific Northwest this species is found throughout California and in the southwest as far east as western New Mexico.

P. edwardsii is single brooded and occurs in fall from late August to early October. It is nocturnal and comes to light.