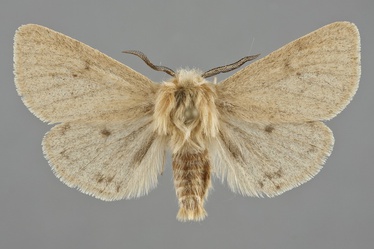 Spilosoma vagans is a variably colored and patterned, medium-size (FW length 14 - 18 mm) tiger moth. The ground color of both wings is similar, most commonly light yellow brown with a salt-and-pepper dusting of black scales, but the color ranges to ochre, bright orange brown, gray brown, and dark reddish brown. Most specimens have a black spot at the lower end of the discal cell. The lines are dark gray, somewhat diffuse, and discontinuous and range in prominence from completely absent to all normal lines present. The hindwing markings are also variable. Almost all specimens have a gray discal spot and traces of a marginal band, but the strength of the markings ranges to all but the terminal wing and fringe suffused with dark gray.

This species is most likely to be confused with Spilosoma pteridis, especially reddish and dark forms from the northeastern part of the range in British Columbia and Washington. The relationship between these taxa is a subject of current study (C. Schmidt, personal communication).

The variation in this species is geographic. Populations from the northeastern range have a high proportion of orange and dusky forms. The subspecies S. vagans kasloensis is available for them. Specimens from southwestern Oregon are slightly larger and more yellow than those from the rest of our region. Populations from the central California coast are gray brown and appear spotted due to being strongly marked.

This species is widely distributed in drier forests of western North America.  It is common to abundant in open ponderosa pine forests east of the Cascades, extending to mixed hardwood-conifer forests in southwestern Oregon.  It may experience massive population explosions during warm, dry years as in the Blue Mountains of northeastern Oregon during 1992.

The northern Pacific Northwest distribution of Spilosoma vagans is interesting in that it is common in eastern and northeastern Washington and adjacent British Columbia and Idaho, occurring as far west as the Methow Valley, Okanogan County, Washington, but is absent from western Washington and British Columbia. In Oregon it occurs in the Blue Mountains and in the southwest south of where the Blue and Cascade Mountains approach each other. It also occurs in southeastern Oregon and southern Idaho.

This species is a generalist feeding on various kinds of herbaceous vegetation.

Spilosoma vagans has been found from late April until early August in our region. It is most common in June. The adults males are nocturnal and come to light. Females are rarely if ever collected in light traps.