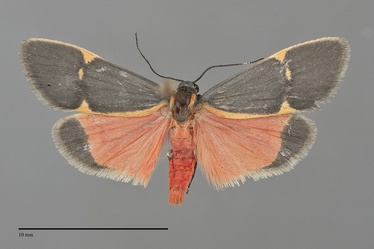 Cisthene barnesii is a small (FW length 11–12 mm), brightly-colored moth that is only found in southeastern Idaho in the Pacific Northwest and flies during the summer. It has an orange line across the forewing and a red or yellow hindwing. The forewing is even blackish gray, usually with orange along the costal and posterior margins that are connected by a narrow straight orange band across the distal third of the wing. The hindwings are red, dark pink, or orange-yellow with a narrow black marginal band that spares the anal angle. The dorsal head and central thorax are black, while the collar and tegulae are orange. The abdomen is red. The antenna is filiform.

This species can be identified easily in the Pacific Northwest by its southern Idaho distribution, small size, black forewing with an orange transverse line, and red or yellow hindwing with a black margin. Many similar Cisthene species are found in the Great Plains and southwestern United States. Cisthene barnesii is the only species of the genus in the Pacific Northwest and the only other similar moth in our area is Polix coloradella (in the Oecophoridae - a family not featured on this website). P. coloradella has a black hindwing and a somewhat different forewing pattern.

This species has been collected in dry bunchgrass steppe habitats in the Pacific Northwest. It can be moderately common in this habitat in its limited range.

Cisthene barnesii is only known from southeastern Idaho in our region where it has been found near Snowville, Utah, and slightly further north near the Snake River.

This species has a Rocky Mountain region distribution in the United States, ranging from southern Montana and western North Dakota to near the border with Mexico in Arizona and New Mexico.

No information is presently available for this species.

Cisthene barnesii has been found from mid-July to late August in Idaho. It is nocturnal and comes to light.