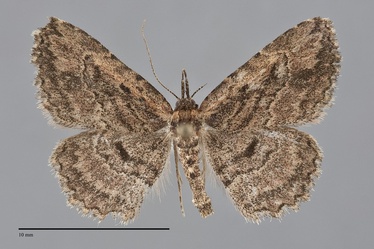 Mycterophora longipalpata is our most widespread Mycterophora species. Like the other members of the genus, it is a small species (FW length 9 - 13 mm) with broad wings and bipectinate male antennae, resembling an inchworm moth (family Geometridae) more than other erebid or noctuid moths (families Erebidae and Noctuidae, respectively). The forewings and hindwings are similarly colored and patterned. The ground color is dull brownish gray, with faint transverse banding by the ordinary transverse lines. The apical third of the forewing is slightly darker than the ground color. The postmedial lines are dark gray, thin and usually well-defined. The forewing postmedial line is weakly scalloped, broadly excurved around the reniform spot and then oblique toward the base at the posterior margin. The hindwing postmedial line is smoother, also excurved around the discal spot and slightly offset toward the base posterior to the spot. The forewing reniform spot and hindwing discal spot are similar dark gray bars, that on the hindwing slightly stronger. The palpi are long. The male antenna is broadly bipectinate, while that of the female is simple.

This species resembles several of our other Mycterophora species. Mycterophora inexplicata, found across central British Columbia has an unmarked ochre forewing costa and lacks the discal spots of M. longipalpata. Two Oregon species, Mycterophora rubricans and Mycterophora monticola are both red-brown with more diffuse postmedial lines.

There is variation in the appearance of Pacific Northwest specimens lumped under the name Mycterophora longipalpata, suggesting that more than one species might be present. Some of the variation is depicted by the illustrated specimens.

Mycterophora longipalpata is found in forests throughout our region as far north as south-central British Columbia. It is not found in the wet forests west of the Cascade crest in Washington, but does occur in western Oregon.

This species is found in the American West south of our region. There are no records of it at Alberta's Strickland Museum.

This species is on the wing in late summer and early fall. Records are from early July to mid September. It is nocturnal and comes to light.