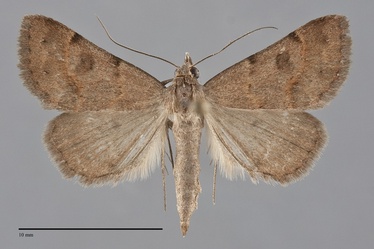 Hemeroplanis historialis is a small gray and reddish-brown moth (FW length 11–13 mm). The forewings are somewhat triangular in shape with an evenly convex outer margin. The ground color is slightly glossy gray, slightly glossy reddish gray, to dull powdery gray. All of the markings are quite variable, with darker gray to red-brown shading between the postmedial and subterminal lines or on the entire wing distal to the postmedial line. The antemedial and postmedial lines are dark gray spots at the costa, otherwise pale or partially red-brown to black. The antemedial line is nearly straight and is oriented perpendicular to the wing. The postmedial line is smooth, outwardly convex around the reniform spot. The postmedial line is pale, usually preceded by a series of dark round or wedge-shaped spots. The reniform spot is kidney-shaped, usually similar to the lines in color and intensity but occasionally filled with black. The orbicular spot is absent. The hindwing is lighter brownish gray with a faint discal spot and dark margin.

Although variable in color and pattern, this species can usually be recognized by the combination of small size, triangular forewing shape, and gray and red-brown color with dark marks at the costa at the antemedial and postmedial lines and relatively large reniform spot.

This species is widely distributed in forest habitats throughout western North America.  In the Pacific Northwest, it is common to abundant in most forest habitats both east and west of the Cascades at various elevations. It is most common in open pine forests.

Hemeroplanis historialis occurs in forests throughout the Pacific Northwest as far north as southern British Columbia.

This moth species is found in western North America. The range extends south through California and then east to western Texas outside of the Pacific Northwest.

No specific foodplant records are available for this species, but it is suspected to feed on legumes (Fabaceae).

Adults of H. historialis have been collected from May until August, but most records are from June and July. It is nocturnal and comes to light. This species is sporadic but can be abundant.