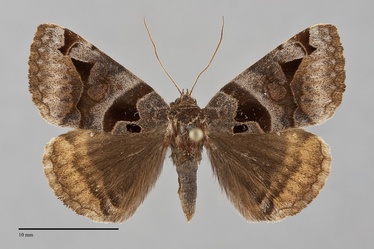 Euclidia cuspidea is a day-flying eastern species that barely enters British Columbia. It is medium-sized (FW length 15–18 mm) with triangular forewings. The ground color is mottled brown with a lighter violet tint at the outer margin and near the antemedial line. The dominant marks are dark brown: the antemedial line and an adjacent dot at the posterior margin, an equilateral triangle distal to the reniform spot, and an angular mark at the inner subterminal line near the apex. The other lines and spots are inconspicuous. The hindwings are coppery, with dark brown suffusion medial to the postmedial line and a submarginal line.

This species is very closely similar to Euclidia ardita, a more common and widespread species in our area. These species can be told apart by the shape of the lateral contour of the dark brown area bordered by the antemedial line. This is evenly outwardly convex in E. cuspidea while the mid-portion is straight to slightly concave in E. ardita. Euclidia cuspidea tends to be larger and is lighter colored than E. ardita.

This species is common in moist forest and meadow habitats of eastern North America, and may extend westward across Canada to the Rocky Mountains.

This species enters our area in northeastern British Columbia where it is at the very western edge of its range.  It has been found most commonly in the Peace River region.

Euclidia cuspidea is an eastern and central North American moth. Franclemont (1957) gives the range as Utah, Montana, and Alberta to southern Quebec, northern Florida, and southern Mississippi. A disjunct populations also occurs in the White Mountains of Arizona.

This species is a foodplant specialist feeding on various herbaceous legumes (Fabaceae).

Euclidia cuspidea is a spring-flying diurnal moth.  It has been collected during late May to mid-June in our area.