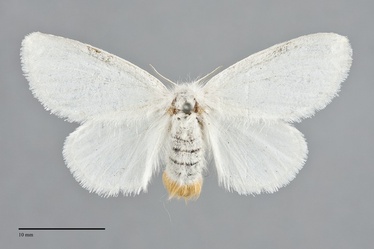 Euproctis similis, the Goldtail Moth, is a pure white small to medium-sized moth (FW length 14–16 mm) with a bright orange or gold tip to the abdomen. It is a Eurasian species that has been found on Vancouver Island in the past but appears to no longer occur in the region.

No other moths are similarly colored in our region. Moths with all-white wings in our area lack a yellow distal abdomen, and usually have black or colored markings on the legs that E. similis lacks.

This species is not permanently established in North America.  It has been collected near populations centers on southern Vancouver Island and would most likely be expected to occur as a re-introduction introduced on imported  cultivated trees from Europe if it were to be found in our area again.

This species is Eurasian in origin where it is widely distributed in the temperate zone. It has been reported several times from North America but has probably not become established here.

A single Pacific Northwest records is from Wellington, British Columbia.

The larva of Euproctis similis is a general feeder on deciduous shade and forest trees.

The single Vancouver Island record of this moth is from early May. In Europe the flight is from late June through July (Ferguson 1978). The adults have a peculiar resting posture in which the legs are outstretched, the wings are positioned near the body, and the golden tail is extended upward.

This species is a pest on deciduous trees in Europe.