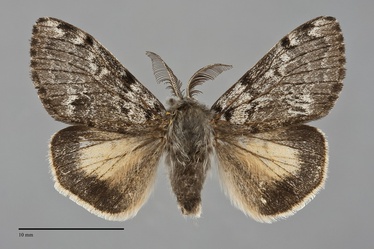 Gynaephora rossii is a day-flying alpine moth found in northern British Columbia. The males are slightly smaller than the females (FW length 15–16 mm in males; 17 mm in females) and have light ochre yellow hindwings with dark gray well-defined marginal band and light fringe. Those of females are darker brownish gray with a marginal band. The forewings of both sexes are mottled gray with jagged black transverse lines, a small black discal dot surrounded by paler gray scales, and a black and pale gray mark near the anal angle that is analogous to the better defined subanal spot found in many other members of the tribe Lymantriini. The antennae are bipectinate, very strongly so in males, and the eyes are small typical of many day-flying moths.

This species can be recognized by its northern alpine habitat, daytime flight, black-banded ochre hindwing, and bipectinate antenna.  It is unlikely to be confused with any other species. The wing color is most similar to the arctic and alpine noctuid moth Polia richardsoni with which it flies, but this species differs greatly in detailed forewing pattern (including a kidney-shaped reniform spot, smooth lines, and a checkered forewing fringe), has a much thinner antenna, and has hairy eyes.

This species is a tundra species that occurs in rocky alpine habitats on top of high mountains.

This species as a Holarctic distribution, occurring in Japan and Siberia in the Old World. The Nearctic populations are found in arctic, subarctic, and alpine tundra from Alaska to Labrador. Isolated alpine populations are found on mountains as far south as the White Mountains of New Hampshire and in Colorado.

The males of this species fly rapidly over tundra seeking calling females (the name Gynaephora means woman-seeking) and are difficult to catch except if one is lucky enough to encounter a calling female. This moth is usually on the wing in July, but the flight is dependent on snow pack and weather conditions.