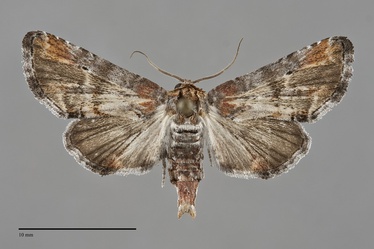 Marathyssa inficita is the only member of the family Euteliidae in the Pacific Northwest. It is a small to medium-sized moth (FW length 13–15 mm) with similarly-colored wings displaying a radiating calico pattern of gray, white, and rusty red-brown. The forewing is relatively long, has a slightly concave posterior margin, and a slight angle of the outer margin. It is dull gray is mottled with white on the posterior half, greatest in the median area, and red-brown on the base and near the apex. A radiating pattern of light and dark is produced by white along the dark veins. The antemedial and postmedial lines are composed of three dark gray lines but are only clearly evident on the costa and at the trailing margin. The terminal line is dark and the fringe is dark gray mottled with white opposite the cell and at the anal margin. The reniform spot is an ill-defined white patch with a single black dot at the anterior end. No other spots are evident. The hindwing has slightly concave lateral and posterior margins. It is mostly gray with a similar streaky pattern as the forewing, but the medial portion is light gray to white and a small red-brown patch is present at the anal angle in some specimens. The hindwing  fringe is gray with white where the margin is concave. The head is orange anteriorly and white on top. The collar is gray at the base and orange elsewhere. The rest of the thorax is orange with gray tegulae. The abdominal segments are pale gray anteriorly and darker posteriorly anteriorly, becoming more diffusely orange posteriorly. The tip of the abdomen has divergent tufts in males. The antenna is biserrate.

This species can be identified by its unique wing shape and calico pattern of gray, white, and rust. The resting living moth has a unique posture that is described below.

This species is sporadically distributed in open forest and brushland habitats throughout much of North America, but may be locally common where sumac is abundant.  In the Pacific Northwest, it is mostly restricted to dry canyonlands.

Marathyssa inficita is found east of the Coast and Cascade Ranges as far north as southern British Columbia. It is known from eastern Washington, northeastern Oregon, and southern Idaho in the Columbia Plateau and Blue Mountain Ecoregions.

This species is widely distributed in North America. Outside of the Pacific Northwest it occurs across the Continent to southern Quebec. In the south it occurs from southern California and Arizona to Texas and Florida.

This species is a foodplant specialist feeding on sumacs (Rhus spp.) in the Anacardiaceae, and particularly prefers R. trilobata in western North America.  It may also feed on poison ivy (Toxicodendron radicans).

Adults are on the wing during the summer and have a long flight season from mid-June through August in our area. They are nocturnal and come to lights. The moth has a curious resting posture in which the wings are furled longitudinally and pressed down against the substrate while the abdomen is pointed up.