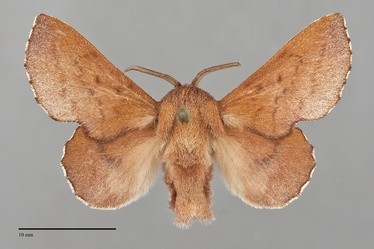 Phyllodesma coturnix is an enigmatic taxon that is found throughout California and likely also occurs in southwestern Oregon. It, and the more common and widespread Phyllodesma americana, are difficult to distinguish by appearance and genitalia, although differences in mitochondrial DNA suggests that they are distinct species. Franclemont (1973) and Powell & Opler (2009) indicate that the moth is similar to P. americana in California, but is smaller and has smaller male genitalia without other diagnostic features. Based on the plates in the Moths of North America Fascicle (Franclemont 1973) it is a medium-sized moth (FW length in males 15–17 mm; 19 mm in females). The outer margins of both fore- and hindwings are scalloped, accentuated by white color of the fringe between the veins. A prominent concavity is located at the anal angle of the forewing and there is a broad flange along the posterior margin, both typical for the genus. The forewing light orange brick-red, lighter blue-gray on the distal forewing, while the hindwing is darker with similar blue-gray distal to the postmedial line. The forewing is marked with scalloped gray antemedial, postmedial, and subterminal lines. The orbicular and reniform spots are simple gray spots. The hindwing has darker postmedial line and an ill-defined dark marginal band. The body is thickly covered with scales of the same color as the forewings. The antennae of both sexes are bipectinate.

This species can be recognized as a Phyllodesma by the reddish color of both fore- and hindwings and the prominent concavity at the anal angle of the forewing. The distinction between P. coturnix and P. americana appear to be small and no recent reference gives a foolproof diagnostic character for separating them. Franclemont (1973) states that P. coturnix tends to be smaller and has smaller male genitalia. He suggested that someone should rear P. coturnix, likely in hopes that differences could be discovered in the larvae or possibly because he had a suspicion that the taxa might not be distinct. Powell & Opler (2009) state that the species can only be distinguished by the male genitalia. In general, all California Phyllodesma are duller orange, lighter in color, and more powdery than those from the Pacific Northwest. However, Tomas Mustelin believes that there are two taxa involved based on collecting in southern California.

Based on limited samples, the cox1 mitochondrial DNA sequence of P. coturnix is sufficiently distinct from that of Pacific Northwest P. americana to suggest that they are distinct species. Sampling of California Phyllodesma by this technique has been very limited to date and might shed further light on this situation.

The larva of P. coturnix is unknown.

This species is narrowly endemic to woodlands and brushlands in California, extending northward into southwestern Oregon.  No information is presently available regarding specific habitat preferences of this species; however, it is most likely to be found in oak forests.

Phyllodesma coturnix is presumed to occur in southwestern Oregon based on its distribution in California. Specimens from our area have been referred to as this species, although no confirmed specimens were examined in the course of preparing this site. Phyllodesma coturnix is most likely to be found in the Siskiyou Mountain region and possibly also in southern Klamath County.

This moth is found in California as far north as Siskiyou County and as far south as the border with Mexico.

No information is presently available regarding larval foodplants of this species, but it probably feeds on hardwood shrubs and trees based upon closely related species. It seems as though oak (Quercus spp.) is a likely candidate.

This species is double-brooded in California, flying in late winter and very early spring, and again during the summer.  It is nocturnal and comes to lights.