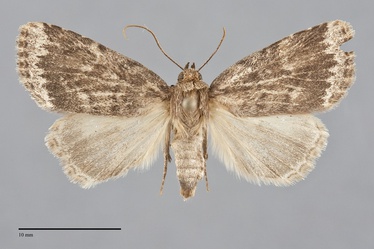 Amphipyra glabella is an eastern species that barely enters our region in eastern British Columbia. It is brown-gray small to medium-sized moth (FW length 14–16 mm) with broad somewhat rounded forewings. The terminal area is pale, separated from the rest of the wing by a toothed subterminal line. The antemedial and postmedial lines are dark gray to absent. The postmedial line forms a wide arc around the reniform spot when visible. The fringe is weakly checkered light and dark brown-gray. The orbicular and reniform spots are often evident as pale patches, although the orbicular spot is a dark dot in some individuals. The claviform spot is absent. The hindwing is pale brown-gray, darker in females, with a light margin, a thin gray terminal line, and a weakly checkered fringe. The head and body match the forewing ground color. The male antenna is filiform.

This species resembles Amphipyra brunneoatra. This species is southwestern and Californian in distribution and barely enters the Northwest in southwestern Oregon. These species can therefore be identified by locality alone.

This species is widely distributed throughout much of eastern North America, extending westward to the Rocky Mountains in moist forest habitats.

The range of this species includes the eastern and central portions of North America. It ranges north to southern Canada and south to Pennsylvania, Kentucky, and Colorado.

Amphipyra glabella flies in late summer with most eastern records from July and August according to Forbes (1954). It is nocturnal and comes to lights.