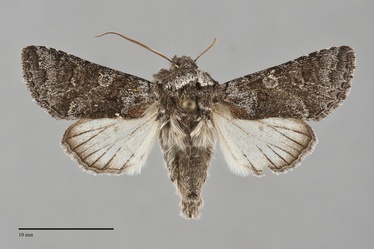 Pseudocopivaleria sonoma is a charcoal gray, medium-sized moth (FW length 16 mm) that flies in oak forests of southwestern Oregon in the spring. It has a lighter gray, round orbicular spot at the edge of the thoracic collar, and a white hindwing with dark veins and margin. The forewing has a slightly pointed apex. The dark gray is sprinkled with lighter gray scales, producing a hoary look at the base and in the subterminal area. The transverse lines are dark gray but are very poorly seen against the dark ground. The irregular subterminal line is most evident since it sets the lighter subterminal area apart from the darker terminal area. The fringe is also dark gray. The orbicular spot is round, pale filled with a dark central ocellus. The reniform spot is wide, weakly figure-eight shaped, dark gray and filled with the ground color. The claviform spot is small and barely evident against the dark ground. The hindwing is nearly white with dark gray margin and fringe, small discal spot, and veins. The head and thorax appear large for the size of the moth and are dark with lighter gray tip of the collar and tegulae margins. The male antenna is moderately biserrate.

The most similar spring-flying moth is Pleromelloida conserta. It lacks the pale orbicular spot and has better defined transverse lines on the forewing than P. sonoma, and its hindwing is dark gray rather than white.

This species is at its northern range limit in Oregon.  It is usually very rare and sporadic in oak woodlands or mixed hardwood-conifer forests with oaks extending from central California north through western Oregon at low elevations.  This species is considered to be management sensitive in the Northwest, depending on oaks as a larval foodplant.

Pseudocopivaleria sonoma is restricted to low elevation forests in western Oregon in the Northwest.

The range extends south through western California to the vicinity of Los Angeles. It is also found in the northern Sierra Nevada.

This species is a foodplant specialist feeding on oaks (Quercus spp.) in the Fagaceae.  Oregon white oak (Q. garryana) is the suspected larval foodplant in the Pacific Northwest.

Adults fly in the early spring and have been collected in April in our area. They are nocturnal and come to lights.