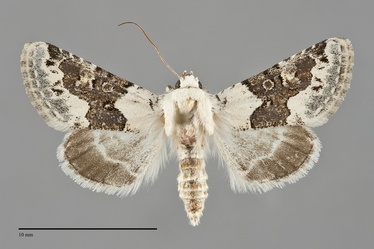 Triocnemis saporis is a small (FW length 11 - 14 mm), creamy-white moth that flies in steppe habitat during the summer. It has a gray median area, pale circular orbicular spot, and black marks in the subterminal area. The pale areas on the wing and thorax have a rosy tint in some specimens. The entire median area is gray with a few interspersed tan scales with a slight metallic sheen in angled light. Powdery black marks are present in the anterior and mid-subtertminal area, forming an irregular triangle at the costa and a few lines and chevrons on the mid-wing. The terminal area is filled light blue-gray with a scalloped lateral edge. The terminal line consists of cream inner lunules and gray lateral lines. The fringe is white with a faint median gray line. The basal, antemedial, and postmedial lines are powdery black, single. The basal line is a short line near the anterior wing base. The antemedial line is smooth and is angled 90 degrees with apex lateral at mid-wing. The postmedial line is smooth and sinuous, with a less prominent bend toward the angle of the antemedial line causing a waist-like narrowing the intervening median area. The subterminal line is pale, evident as an irregular edge to the gray terminal area. The orbicular spot is thin and black in outline, small and round to slightly oval, and filled with white and a dark central ocellus. The reniform spot is hourglass-shaped, thin and black with incomplete anterior and posterior segments. It is filled with cream adjacent to the black outline and at the waist and blue-gray at the upper and lower ends. The claviform spot is small and black. The hindwing is white with a suffusion of gray scales, light medial to the postmedial line and heavily toward the margin where it forms a dark band with pale patches near the anal angle. The discal spot is absent or small and thin. The fringe is white. The head lacks a tubercle. The color of the head and thorax is cream, with a patch of black scales posterior to the eye and scattered black scales on the tegulae. The male antenna is filiform.

This species is most similar in color and pattern to Tristyla alboplagiata, although it lacks the large white field on the forewing formed by the open reniform spot in this species. Tristyla alboplagiata also has a large spiked three-pronged frontal tubercle that is lacking in Triocnemis. Triocnemis saporis could be mistaken for a Sympistis (subfamily Oncocnemidinae), but no species in this genus has a similar forewing pattern.

This species is widely distributed in juniper woodlands and dry sagebrush steppe at low elevations east of the Cascades.  It is usually sporadic, uncommon to rare, but may be locally common.

Triocnemis saporis is found in the dry interior steppe regions of the Northwest, including the Columbia Basin, the Snake River Plain, and the Northern Basin and Range Ecoregion of southeastern Oregon.

This species is predominantly found in the Southwest outside of our area. The range includes most of California east to western Texas and north to Colorado.

This species has been found on a desert buckwheat, Eriogonum pusillum (Polygonaceae), in Arizona by McFarland (1975).

This species flies during the summer and is most common in July in the Northwest. It is nocturnal and comes to lights.