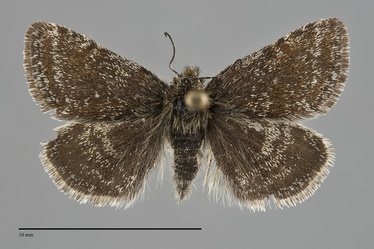 Axenus arvalis is a very small (FW length 9 mm) dark gray day-flying moth that occurs in the early spring in southwestern Oregon. The forewing has a triangular shape and is hoary charcoal gray in color. The pattern is reduced to pale markings near the costa at the transverse lines and a more complete pale subterminal line. The hindwing is similar dark gray with pale dusting at the discal spot and three incomplete lines between the spot and the outer margin. The hindwing fringe is pale gray. The head and thorax are hoary charcoal gray. The eye is reduced in size. The male antenna is filiform.

This species is unlikely to be confused with other moths in the superfamily Noctuoidea. It is most similar to several members of the family Pyralidae.

No information is presently available regarding habitat preferences for this species in the Pacific Northwest.

Axenus arvalis has been found in southwestern Oregon in the Northwest.

The range of this species is limited to California outside of the Northwest. It occurs as far south as the Mexico border.

No information is presently available regarding larval foodplants of this species, but it may feed on clovers (Trifolium spp.) in the Fabaceae based upon adult associations.

Adults fly during the day and visit flowers. They are on the wing in early spring. Powell and Opler (2009) report the flight season as March to June in California.