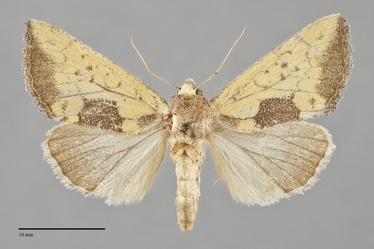 Stiria rugifrons is a distinctive, light yellow medium-sized moth (FW length 19 mm) that flies in southern Idaho during the summer in our region. It has brown-gray patches along the trailing and outer margins of the forewing. The forewing apex is pointed, and there is a slight angle to the outer margin near vein CuA1. The forewing is even yellow with small brown-gray patches marking the positions of the lines and spots. Larger patches of the same color are present at the posterior base of the wing, on the lower third of the median area, and in the terminal area. The transverse lines are incomplete except for the postmedial line which is scalloped between the veins. The hindwing is pale gray, gradually darkening toward the margin anterior to vein CuA2 and remaining pale on the inner margin, with a thin brown-gray terminal line and pale fringe. The top of the head is yellow, while the thorax is powdery brown-gray. The frons has a raised tubercle in the center of a depressed area with a raised rim.

Poole (1995) separates the North American populations of this species into two species with subtle differences, calling the western populations Stiria intermixta Dyar. We consider these to be geographic variation of a single species.

This species is common and widely distributed on prairies, disturbed open grasslands, and along roadsides of the Great Plains.  It may be actively spreading into the Pacific Northwest in association with sunflowers in low elevation disturbed habitats such as agricultural lands, roadsides, and in urban areas.

Stiria rugifrons has only been collected in southern Idaho in the Northwest part of its range.

This species has one of the largest North American distributions of any species in the tribe Stiriini. It occurs from southern Alberta and Saskatchewan to Utah and Arizona in the west, and east to southern Ohio, the western Piedmont, and the Florida Panhandle in the East.

This species is a foodplant specialist feeding on sunflowers (Helianthus spp.) in the Asteraceae.

Adults fly during the late summer and fall throughout their range. They have been collected in July and August in Idaho. This species is nocturnal and comes to lights.