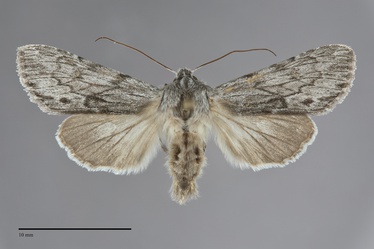 Dolocucullia poolei is a medium-sized gray moth (FW length 15–17 mm) with a long pointed forewing that occurs in the western Pacific Northwest as far north as the Olympic Peninsula during late spring and summer. Its antemedial line is broad on the costa and has a zigzag course, strongly pointed outward in the fold. The forewing is less pointed than in genus Cucullia. The ground color is usually slightly powdery medium-gray, uncommonly whitish gray, with variable dark shading near the posterior and outer margins, typically darkest and most extensively in the posterior median area. A dark spot is present in the posterior subterminal area in most specimens, often with a slightly lighter gray line at the outer margin near vein CuA2. The transverse lines are dark gray, slightly indistinct. The basal line is very short, limited to the costa. The antemedial line is broad on the costa where it is perpendicular or angled toward the outer margin, thinner and strongly zigzagged below the cubital vein to touch the postmedial line in the fold. The median line is only a dark mark on the costa. The postmedial line is evenly scalloped, strongly curved around the cell, then oblique to the wing to end on the mid-trailing margin. The subterminal line is a dark mark near the costa. The terminal line is a series of black spots between the veins, and the fringe is the ground color. The typical noctuid forewing spots are usually absent, although the reniform spot is evident as a dark smudge in some specimens. The hindwing is light gray with a slightly darker brown-gray marginal band and dark gray veins. The hindwing fringe has a pale whitish edge and a light gray base. The head and thorax are the same as the forewing, with a dark V-shaped mark (apex anterior) on the median collar at the base of a slight midline hump. The male antenna is filiform.

Dolocucullia poolei can usually be distinguished from western Pacific Coast moths in other genera by its gray color and the touching zigzag antemedial and postmedial lines. In this region it resembles Cucullia intermedia or Cucullia florea, but both of them lack the antemedial line. Dolocucullia poolei somewhat resembles Lacinipolia patalis, a very common moth in western Oregon and Washington during late spring. Compared to D. poolei, L. patalis has a shorter less pointed forewing with better defined markings that include a black basal dash and a reniform spot. It lacks the dark gray spot near the anal angle of D. poolei. Under magnification, the eyes of Dolocucullia are smooth and those of Lacinipolia are covered by short hairs.

Dolocucullia poolei is found in a variety of habitats. In the Pacific Northwest this species is often common in moist meadows of coastal rainforests within the Coast Range.  It is particularly abundant in disturbed, open clear-cuts of the Oregon Coast Range.  It also occurs less commonly in meadows of the Cascades.

Dolocucullia poolei occurs in western Oregon and Washington in the Pacific Northwest. It is most commonly encountered near the Pacific Coast—and is limited to the immediate coast at the northern end of its range on the Olympic Peninsula—but is found inland as far as the Cascade Crest in parts of Oregon.

The range of this species extends south in western California to near the border with Mexico. An isolated population is in the high Sierra Nevada range.

No specific information is known regarding larval foodplants of this species, but it probably feeds on herbaceous Asteraceae such as goldenrods (Solidago spp.) or gumweed (Grindelia spp.). The exotic tansy ragwort (Senecia jacobaeae) might be a foodplant in the Oregon Coast Range.

The flight period is late spring and summer in the Pacific Northwest, with records from late May to August. It is nocturnal and comes to light.