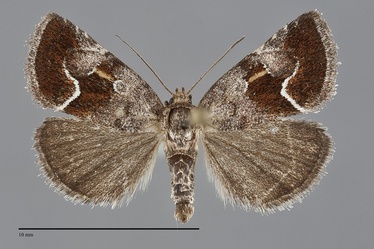 Deltote bellicula is a distinctive very small day-flying moth (FW length 9 mm) that occurs in spagnum bogs during early summer. The forewing is light gray medial to the mid-wing and near the reniform spot, rich brown in the anterior and posterolateral median area, and near the outer margin. The remainder of the distal wing is golden brown. The antemedial line is faint, slightly zig-zag in shape. The postmedial line is laterally convex from the costal margin to the fold, then bent 90 degrees to end at the anal angle. The lower two-thirds are white, forming a prominent chevron-shaped mark.The subterminal line is golden brown and is partially confluent with the adjacent similarly colored area. The orbicular and reniform spots are inconspicuous. The adjoining portions of the spots are white and are joined across the cell by a yellow line. The hindwing is dark gray with a lighter two-toned fringe. The head and thorax are gray. The male antenna is filiform.

This species is unmistakable due to the white chevron on the lower outer part of the small brown, gray, and gold colored forewing.

This species is widely distributed in bog habitats in eastern North America. The only records of this species from the Pacific Northwest are from sphagnum bogs.

Deltote bellicula has only been collected once in British Columbia by Jim Troubridge from the Burns Bog in Delta in the lower Fraser Valley. It has also been photographed in the north Okanagan region of southcentral British Columbia. It is probably much more widespread than these records suggest but has gone undetected due to lack of sampling in bogs.

The range of this species extends from the east coast to central Alberta outside of the Pacific Northwest. The range in the East extends from Newfoundland to Florida along the Atlantic Coast west to Missouri and Texas.

No information is available regarding larval foodplants for this species.

Deltote bellicula is a day-flying species and does not come to light. It is relatively slow-flying and easy to collect with a net. The only Pacific Northwest records are from mid-June. It flies during late spring in eastern North America.