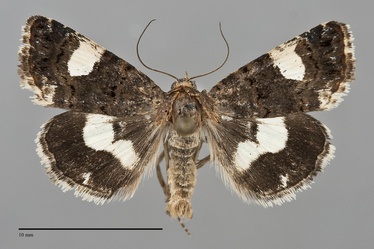 Tyta luctuosa is a distinctive, small (FW length 11 mm), dark brown and black noctuid moth that was introduced for biological control of bindweed in the Willamette Valley and appears to be spreading to other Pacific Northwest regions. It has pure white patches on both wings. The ground color of the forewing is blackish brown, darkest on the terminal wing near the apex. Pure white patch is present at the costal margin in the distal terminal area, possibly representing filling of the reniform spot which is otherwise absent. White scales produce a mottled appearance at the anal angle, including in the fringe, and in the fringe opposite the cell. The lines are black but poorly defined against the dark background. The pale subterminal line is only evident near the costal margin. No spots are evident on the forewing. The hindwing is pure white with extensive dark gray at the base to the black discal spot and a broad black marginal band. A white spot is present near the outer margin of the marginal band near the anal angle. The hindwing fringe is pale with dark gray inner line. The head has a gray frons and is light gray dorsally. The thorax is brown. The male antenna is filiform.

This species can be identified by the unique pattern of dark and white on both wings. The hindwing resembles those of several species of Schinia. No Pacific Northwest Schinia species have dark brown forewings with white spots in the median area.

This species is established in agricultural areas where it was introduced a decade ago as a biological control agent against Hedge Bindweed (Convolvulus arvensis in the Convolvulaceae).

Tyta luctuosa was first known in the Pacific Northwest from the Willamette Valley in western Oregon. It has now been found in south-eastern Washington.

This species is native to the Old World where it occurs from central and southern Europe and northern Africa to central Asia (Goater et al. 2003). Attempts to introduce this species have been made at several locations in North America, including on the East Coast and Great Plains.

The adults fly during the summer and have been collected during August in Oregon. They are nocturnal and come to lights.

Probably none. A review of the North American literature suggests that this species is marginally effective as a control agent for Bindweed.