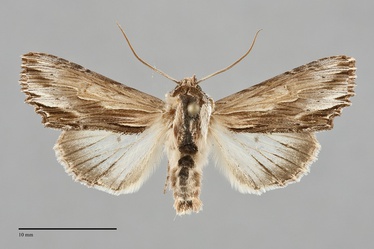 Alastria chico is a streaky, medium-sized noctuid (FW length 15 - 18 mm) that flies west of the Cascade Mountains throughout the year. It has forewings that are medium brown anteriorly, dark brown posteriorly, and gray toward the outer margin. The pattern is so longitudinally streaked that the elements of the ordinary lines have largely been lost. The ground color is medium brown from the base of the wing to the expected position of the postmedial line lateral to the reniform spot. The forewing is dark wood brown with black lines between the veins in the lower half of the median area, posterior to a horizontal black line located just above the trailing margin near the base, at the anal angle, and in a roughly triangular area at the margin opposite the reniform spot. Most of the subterminal area is light blue-gray, forming a W-mark to the outer margin on veins M3 and CuA1 that is bordered posteriorly by black horizontal lines. The orbicular spot is only evident as a longitudinal brown line in the medial cell. The reniform spot is Z-shaped and difficult to recognize. The lateral anterior part is extended toward the outer margin and the medial posterior part extends toward the base. It is filled with light brown and appears slightly lighter than the surrounding wing. The claviform spot is absent. The hindwing is light whitish-gray with a poorly defined blackish gray marginal band on the outer third, a small discal spot, and dark veins. The top of the head and collar are horizontally striped light gray, brown, and black. The central thorax and medial edges of the tegulae are wood brown, and the rest of the tegulae are light gray with brown lateral edges. The male antenna is biserrate.

This species can be recognized by its longitudinally streaked pattern and dark and light brown color with blue-gray at the outer margin. It is most similar to Apamea cuculliformis in general appearance, but this species lacks the blue-gray color on the outer forewing that is present in A. chico.

This species is narrowly endemic to moist grasslands and forests at low to middle elevations west of the Cascades.  These include oak savanna, grasslands, and mixed hardwood forests at low elevations, and coastal rainforests and mixed hardwood-conifer forests at middle elevations in the Coast Range and along the west slope of the Cascades.  With the introduction of exotic common St. John's wort, it has spread into drier and more disturbed habitats such as roadsides and even urban areas.

Alastria chico is found in the western portion of the Pacific Northwest as far north as the Fraser River Valley in southwestern British Columbia. It has been collected south of Puget Sound in western Washington and in the Willamette Valley and on the west slope of the Cascade Mountains in Oregon.

The range of this species extends south along the Pacific Coast to Marin County north of San Francisco Bay. It also occurs in the northern foothills of the Sierra Nevada.

This species is a foodplant specialist feeding on St. John`s wort (Hypericum spp.) in the Hypericaceae.  The original native foodplant was probably H. formosum growing in moist habitats, but with the introduction of exotic H. perforatum from Eurasia, it is now found in drier and more disturbed habitats such as roadsides and even in urban areas.

This species appears to be double-brooded. Adults are most frequently collected from mid-April to late May and from early August until late September (Lafontaine and Troubridge 2004). It is nocturnal and comes to lights.

This species may have some benefit as a biocontrol agent against common St. Johns wort, a noxious exotic weed.