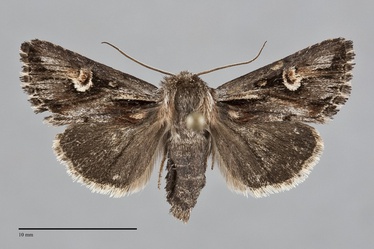 Nedra hoeffleri is a rarely collected, small moth (FW length 13 mm) that flies in the northern Rocky Mountain region during the summer. It has a streaked gray and blackish brown forewing with a white-rimmed reniform spot. The wing is short and stubby. The ground color is steel gray, heavily shaded with blackish brown on the posterior third, in the cell and adjoining central median area, and in the terminal area. Dark veins and black streaks between the veins are present on the distal wing. A long basal dash is white anteriorly and black posteriorly. A remnant of the median area forms a dark spot on the posterior margin. The subterminal line is evident as the transition between the gray subterminal area and the dark terminal area. It extends to the mid-margin as a broad W-mark on M3 and CuA1. The terminal line is a series of dots. The fringe is strongly checkered off-white and brown-black. The orbicular spot is a small pale oval. The reniform spot is moderately large, oval with short spike-like extension on M1 and M3, pure white with a kidney-shaped dark red-brown spot off-center towards the medial and anterior side. No claviform spot is evident. The hindwing is dark blackish gray, slightly paler brown-gray at the base, with a faint discal spot and pale gray-brown fringe. The head and thorax are dark gray-brown, with gray medial tegulae with dark brown along the wing bases. The male antenna is bipectinate.

This moth can be identified by its small size, dark gray and brown color, long black and white basal dash, and oddly-shaped white reniform spot. It is only similar to our other Nedra species, but none of them are likely to occur with it at high elevation. Nedra hoeffleri is the smallest and darkest species in the genus.

This species has only been found on a high mountain in the Rocky Mountain region. It was taken in moist subalpine parkland in an area with firs (Abies spp., Pinaceae), beargrass (Xerophyllum tenax, Liliaceae), grasses (Poaceae) and sedges (Cyperaceae).

Nedra hoeffleri has only been collected in the mountains of extreme northeastern Washington in sight of British Columbia and Idaho.

This species was described from Glacier National Park, Montana and has to our knowledge not been found elsewhere except for the single Washington specimen. Sampling in the appropriate habitat has probably been very limited and it is likely that this moth is more common than these data suggest.

No information is presently available regarding larval foodplants of this species, but it probably feeds on Hypericum species in the Hypericaceae based upon related species.

The only specimen of this moth from our region was collected at blacklight during July.