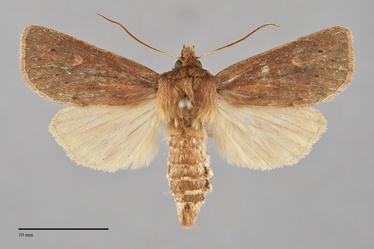 Globia subflava is a sexually dimorphic, medium-sized, wetland moth (FW length 15–18 mm in males; 16–20 mm in females) that flies in wetlands east of the Cascade Mountains during the late summer and fall. It has dark, orange-brown males and straw-colored females with a slight orange tint. In both, the forewing lines are represented by gray spots on the veins. Gray suffusion is present along the veins, darkest along the posterior cubital vein to the end of the cell followed by near the outer margin. The terminal area is slightly darker than the rest of the wing, and there is a variable light suffusion of darker brown scales, especially in the median area. The lines are reduced to black spots on the veins except on the costa, three spots for the antemedial line and a smooth arc of spots for the postmedial line. The orbicular and reniform spots lack outlines and appear as areas of light ground color in specimens with adjacent darker suffusion. There is a gray spot in the posterior reniform spot, most evident in females. The hindwing is light ochre, darker with slight orange cast in males, with dark veins and terminal line in some males. The head and thorax match the forewings in both sexes. The abdomen is relatively long for the size of the wings. The male antenna is bead-like.

Both males and females of this species can be identified by their yellow-orange wings with the lines reduced to spots on the veins. Worn females can resemble Globia oblonga, a slightly larger light tan species with which it flies. This species has a terminal line consisting of small black spots on the terminal line that are evident even in worn specimens. These spots are lacking in G. subflava. Very dark Globia populations from southeastern Oregon are dark brown with darker hindwings than other populations from the Northwest. We assign these to Globia alameda, although the relationship of this taxon and G. subflava is unclear. They might eventually be shown to be conspecific, possibly subspecies.

This species is common and widely distributed in wetland habitats with permanent water throughout much of North America.  In the Pacific Northwest, it is mostly restricted to marshes and the edge of lakes, creeks, and rivers at low elevations east of the Cascades and is often locally common.

Globia subflava is most commonly found in wetlands in the dry steppe interiors of our region. It is common in the Columbia Basin and has also been found in southern Idaho and Oregon. It also occurs in central and southeastern British Columbia.

This species occurs across the Continent from central Alberta and Nebraska to southern Quebec and New Jersey. It is also known from northern California and Utah, although the relationship to G. alameda is unclear in California.

This species is a foodplant specialist that bores into rushes (Juncaceae) and other wetland plants. It is closely associated with bulrushes (Scirpus spp. in the Cyperaceae).

Globia subflava flies in the summer and early fall, usually beginning in mid-July. It is nocturnal and comes to lights, although it rarely leaves the wetlands in which it lives. This species can be found in numbers if lights are placed in marshes in which bulrushes grow.