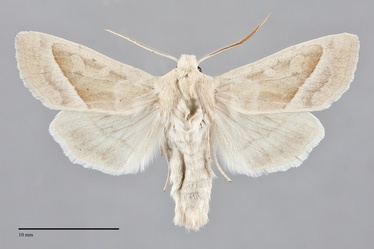 Hydraecia medialis is a medium-sized to large, grayish-tan moth (FW length 16–24 mm) that flies east of the Cascade crest during the fall. Its forewings have a darker, often reddish, median area, a thick brown or reddish-brown and white postmedial line, and pale-filled spots. The forewing apex is often slightly pointed and the forewing margin can be slightly scalloped. The color is pale tan, red-tan, gray-tan, or gray-brown, palest from dry steppe habitats and darkest in southern British Columbia and western Montana. The median area other than the costa is darker than the rest of the wing, gradually darkening to the postmedial line and often with an orange or red tint on the lateral and mid-portions. In some specimens a pale streak extends through the posterior cell, including through the similarly-colored spots. The lateral portions of the subterminal and terminal areas are also slightly darker than the ground. The basal, antemedial lines are comprised of thinner dark components that are a dark shade of the ground color and wider pale components. The dark portions of the latter two lines are the ones that border the median area, and the dark component of the postmedial line is often rich red-brown to dark brown. The basal line is barely evident. The antemedial line is smoothly arched toward the outer margin with a notch toward the base in the cell and a slight concave segment in the fold. The median line is usually absent, sometimes faint on the posterior wing. The postmedial line is thick, most evident as the white component, is drawn sharply toward the base on the costa, is bent acutely toward the base just below the costa, and is angled across the wing to the posterior margin. The subterminal line is pale tan, usually visible across the wing, slightly irregular and preceded by a slightly darker shade. The fringe is similar to the terminal area, without a significant terminal line. The orbicular, reniform, and claviform spots are similar, evident as light filling defects in the darker median area. The orbicular spot is round, the reniform spot is kidney-shaped, and the claviform spot reaches half-way across the median areas. The hindwing, including the fringe, is pale yellow-tan with variable gray suffusion that is heavy in dark specimens. Indistinct gray discal spot, postmedial line and marginal suffusion is very variable, absent to dark. The male antenna is weakly bipectinate with a wide central shaft.

This species can be identified by its large size, cream and reddish or gray-tan color, with darker median area and oblique red-brown to dark brown and nearly white postmedial line. It is similar to Hydraecia obliqua, found west of the Cascade crest, but this species is warmer orange to golden tan. The relationship of these species is discussed under H. obliqua. Hydraecia perobliqua flies in wetlands in arid steppe regions and is similar in many respects to H. medialis. H. perobliqua has warmer orange-brown forewings and an immaculate, pale yellow hindwing. Its forewing spots are rimmed in dark and filled with the color of the adjacent median area, rather than being lighter, as in H. medialis, and the postmedial line is less abruptly bent near the costa.

This moth is very common in open ponderosa pine forests along the east slope of the Cascades and throughout the Rocky Mountain region.  It also occurs in drier sagebrush steppe and juniper woodlands at lower elevations, but is slightly less common in these xeric habitats.

Hydraecia medialis is widespread in our area east of the Cascades, occurring as far north as the Cariboo region in south-central British Columbia.

The range of H. medialis extends across the Rocky Mountains in Montana and then spreads north and south on the Great Plains to reach Calgary Alberta, the western Dakotas, and northern New Mexico. It is also found in the Rocky Mountains and Intermountain west where it becomes dark gray and bright red-brown.

This species probably bores into the stems and roots of larger herbaceous plants.  Lupines (Lupinus spp.) in the Fabaceae are strongly suspected as favorite foodplants in drier habitats east of the Cascades based upon habitat associations and reared specimens of Hydraecia obliqua in Washington (Crumb 1956).

Hydraecia medialis flies during the fall. It has been collected as early as mid-August but is most common during September. It is nocturnal and comes to lights.