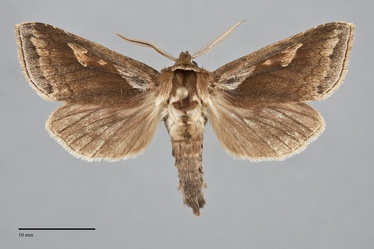 Bellura obliqua is a stout-bodied, large noctuid moth (FW length 18 - 24 mm) that flies near cattail marshes throughout our area. It has tan wings marked with pale on the base of the costa and a willow-leaf-shaped reniform spot. The forewing is relatively broad with a pointed apex. The color is variable, powdery gray-tan to dark brown, with darker colored males. The wing is darkest distal to the oblique antemedial line and lightest in the adjacent anterior base, fading gradually to blend with the ground color along the costa. The subterminal area is slightly lighter than the median area and the terminal area is blue-gray to dark blackish gray. A black dot is present at the wing base, and a dark dash-like mark extends laterally from the antemedial line in the fold. The postmedial line is dark brownish-gray, simple, scalloped, and is located a similar distance from the subterminal line as the width of the terminal area. The subterminal line is pale and diffuse, undulating in course and most evident by dark shading distal to it in some specimens. The terminal line is dark gray, complete. The fringe is slightly lighter than the terminal area. The orbicular spot is very small, evident as light tan or rusty brown filling. The reniform spot is unusual, a light tan oblique ellipse pointed at the anterior and posterior ends, filled with central dark gray-brown, dark brown, or rusty scales. The claviform spot is absent. The hindwing is light gray-tan, sometimes reddish, with slightly darker discal spot, postmedial line, and marginal shade and a lighter fringe. The head and thorax are similar to the anterior wing base, darker posterior to the collar, with weak posterior tufts. The antennae of both sexes are bipectinate, strongly so in males and moderately in females.

This species can identified by its large size, tan to brown color, pale anterior wing base, and leaf-shaped reniform spot. Bellura vulnifica has been recorded as doubtful from Vancouver (Jones 1951). It is more mottled in color than B. obliqua and has a dark strongly scalloped postmedial line. Bellura obliqua is more similar in general appearance to some species in the family Notodontidae such as Nadata gibbosa than to most other species of Noctuidae.

The genus Bellura is in need of revision. Some authorities consider West Coast populations to be Bellura gargantua (Dyar).

This species is common and widely distributed throughout much of North America in wetland habitats such as marshes, lakes, and in the riparian zone along creeks and rivers.

Bellura obliqua is found throughout much of our area south of southern British Columbia, including on both sides of the Cascade Range.

This species occurs across North America from coast to coast. It is most widespread in the East where it occurs from Nova Scotia to Florida along the coast and from Manitoba to Texas at mid-Continent. This species is widespread in the Prairie Provinces of Canada. The distribution is limited to the Pacific Coast in California, extending south to the border with Mexico.

This species bores into the stems of many wetland plants such as cattails (Typha spp.) in the Typhaceae and water lilies such as the yellow pond lily (Nuphar luteum) in the Nymphaeaceae.

Bellura obliqua flies from late spring to mid-summer. Records from the Pacific Northwest span early May to late July. It is nocturnal and comes readily to lights.