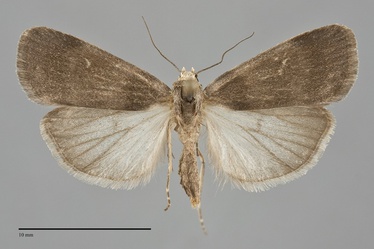 Proxenus mendosa is a small (FW length 11–14 mm), very plain gray moth that occurs in southeastern British Columbia in our region. The white mark at the reniform spot is the only marking on the forewing. The forewing is even medium-dark gray, slightly darker on the distal portion beyond the expected position of the postmedial line and at the base medial to the position of the antemedial line. The reniform spot constitutes the only identifiable forewing marking. It is a faint dark bar followed laterally by a creamy pale spot. The hindwing is dusky light gray, darker toward the margin, with gray discal spot and veins, and a slightly lighter gray fringe. The head and thorax match the forewing in color. The male antenna is filiform.

This species can be identified by its very plain gray appearance on both wings. It is most similar to Proxenus mindara, which lives in dry sage steppe habitats further south. P. mindara has a punctate black orbicular spot that P. mendosa lacks and its hindwing is paler white with less marginal shading than that of P. mendosa. P. mendosa is more likely to be collected with P. miranda, than with P. mindara, but P. miranda is easier to distinguish, as it is a darker blackish gray than P. mendosa. It also has a sheen on both wings that is lacking in P. mendosa.

This species has been collected in mesic forest in the Pacific Northwest. It occurs in habitats with willows. In the Yukon this species often flies during the evening over rocky creek beds and similar open habitats.

This species is found across the boreal zone of Canada as far east as the Gaspe´ Peninsula of Quebec (Handfield 1999). It occurs as far south as northern Wisconsin in the central part of the continent (L. Ferge personal communication). It also occurs in Alberta and as far north as central Yukon Territory.

No information is presently available regarding larval foodplants of this species, but it probably feeds on herbaceous plants like related species. Willow (Salix spp.) in the Salicaceae is another possible foodplant based on habitat preference.

Little is known about the biology of this species in our area. Specimens from Yukon Territory were collected in mid- to late June flying at dusk. This species is at least partially nocturnal and comes to lights.