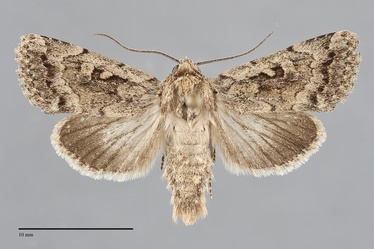 Nudorthodes texana is a small (FW length 12 - 14 mm), dusty, yellow-tan moth that flies in dry habitats during the fall. It has a brassy sheen and a forewing with dark lines and filling of the cell outlining pale spots. The forewing ground color is brassy gray-tan, usually darker dusty gray in the mid-median area, preceding the subterminal line, and in the terminal area below the apex. The cell is usually darker gray from the base to the reniform spot, accentuating the pale filling of the spots. The veins are gray distal to the postmedial line. The basal and antemedial lines are dark gray. Both are strongly zigzagged, the basal line bent with apex lateral below the costa, and the antemedial line is similarly angled on the cubital vein and very strongly on 1A+2A above the trailing margin. The median line is faint gray. The postmedial line is sinuous, a dark spot on the costa and thin and even elsewhere, and biconvex opposite the reniform spot and angled toward the base below the spot. The subterminal line is also sinuous, pale but faint, most evident due to a blackish-gray preceding shade that extends across the forewing but is strongest between the veins. The terminal line is a gray line, slightly thicker between veins. The fringe is gray-tan, similar to the terminal area. The orbicular and reniform spots are incompletely outlined in gray. The orbicular spot is small and oval, usually open toward the costa, and filled with the light ground color. The reniform spot is kidney-shaped or weakly hourglass-shaped, filled with the ground color and gray at the lower end. The claviform spot is absent or a pale line in the fold. The hindwing is light gray-tan with darker gray shading toward the margin, with a brassy sheen similar to that of the forewing, and darker veins. The hindwing fringe is off-white with a gray base. The head and thorax match the forewing color. The eye lack hairs. The male antenna is bead-like.

This species can be recognized by its small size, shiny yellow-tan wings, pale-filled orbicular and reniform spots that contrast with the surrounding darker areas, and blackish shade preceding the subterminal line. It is unlikely to be confused with other fall-flying moths in our area.

This moth was placed in the genus Protorthodes until 2014. Members of the genus Nudorthodes are unique in the tribe Eriopygini in that they lack hairs on the surface of the eyes.

This species is widely distributed in sage steppe regions in the Northwest. It is especially common in wet meadow habitats at low elevations east of the Cascades, including around the edge of marshes and the riparian zone along creeks and rivers.  It was collected in alfalfa fields along the Owyhee River at Rome, Oregon. It occurs in drier sage steppe in the Columbia Basin in Washington away from wet habitats and might not be dependent on these habitats.

Nudorthodes texana is found in dry steppe regions in the Northwest, and has been collected most often in the western part of the Columbia Basin in Washington and in eastern Oregon. The northern limit of its range is in Washington.

The range of N. texana includes the Southwest and the central and southern parts of California to the south of our region.

No information is presently available regarding larval foodplants of this species, but it is probably a generalist feeding on various kinds of herbaceous vegetation.  Alfalfa in the Fabaceae may be a foodplant based upon adult collections.

This species flies during the fall, usually beginning in late August and lasting until early October. It is nocturnal and comes to lights.