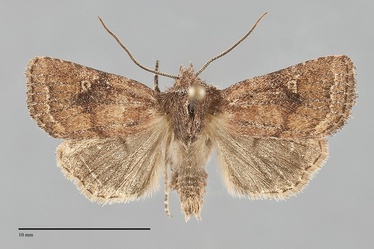 Pseduorthodes puerilis is a small (FW length 11 - 13 mm), orange-brown moth that flies on the immediate Pacific Coast in Oregon during the summer. It has a straight, ochre-brown subterminal line and variable white filling in the reniform spot. The ground color is smooth, slightly lighter at the forewing base and in the terminal area. The transverse lines are double, only slightly darker than the ground and filled with slightly lighter orange-brown and relatively inconspicuous. The darker gray median line is usually prominent, apex angled toward the outer margin through the reniform spot. The pale ochre subterminal line is nearly straight and is preceded on the medial side by a darker brown shade, rarely with dark spots between the veins at mid-wing. The terminal line is thin and dark between veins and light at the tips of the veins. The orbicular and claviform spots are absent. The reniform spot is bar-like or weakly figure-eight shaped, partially outlined in gray. Its anterior half is filled with light orange or white scales while the posterior half is gray like the median line. The hindwing is medium gray-brown with a suffusion of dark gray, dark discal spot, and dark veins. The fringe is lighter, usually with an orange or red tint. The head and thorax match the forewing ground color, often with a light margin to the collar in dark specimens. The eye surface is hairy. The male antenna is filiform.

This species is difficult to distinguish from the much more common and widespread Pseudorthodes irrorata, but should be suspected when the locality is the immediate Pacific Coast. Compared to P. puerilis, Pseudorthodes irrorata is darker red-brown, has more conspicuous antemedial and postmedial lines, and a more irregular subterminal line. The tips of the valves of the male genitalia are thinner in P. irrorata, best appreciated when the species are examined side-by-side.

This species is very narrowly endemic to coastal forests and woodlands immediately adjacent to the Pacific Ocean along the Oregon coast.  It appears to be rare in this restricted habitat.

Pseudorthodes puerilis has been found on the Pacific Coastline as far north as Lane County, Oregon.

The range of this species extends south along the coast to just north of Los Angeles, California.

No information is presently available regarding larval foodplants of this species, but it probably feeds on some hardwood shrub that only grows immediately adjacent to the Pacific Ocean.