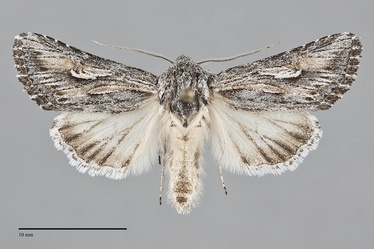 Trichocerapoda oblita is a small (FW length 13 - 15 mm), streaky gray noctuid moth that flies in sage steppe during the fall. Its forewing has a a distinctive light mark comprised of the fused light-filled long orbicular spot and lower reniform spot. The apical forewing is long and pointed. It is sexually dimorphic, with darker females. The color is dusty medium gray with a longitudinally streaked pattern due to thin dark veins. A weak basal dash is present. Light whitish gray patches are present in the anterior subterminal line below the costa, usually extending to the apex, and in the subterminal area in the fold. Tan streaks are present in the distal cell through the reniform spot and in the fold through the claviform spot, both extending to the subterminal line. White outlines the base of the cubital vein to near the orbicular spot. The wing lacks transverse lines other than the subterminal line. It is most evident as a transition between the pale subterminal area and dark gray terminal area, especially on the mid-wing where it forms an ill-defined W-mark on M3 and CuA1. The terminal line is dark gray, thin. The fringe is strongly checkered with white and gray. The orbicular spot is outlined in black and filled with white peripherally and the gray ground centrally, very elongate and usually touching or fused to the reniform spot. The reniform spot is kidney-shaped with a long extension toward the base along the cubital vein. It is partially outlined in dark gray, with white inner line that is strongest in the inferior spot and the medial extension. The claviform spot is very long, similar in color to the orbicular spot but slightly less prominent in most specimens. The hindwing is white in males and gray in females, with a diffuse dark gray marginal band and gray veins that darken toward the margin. A thin gray terminal line is present. The fringe is white with a few dark scales at the base in males and white with a gray base in females. The head and thorax are hoary gray with black and white transverse barring on the distal collar. The eye is covered with fine hairs. The male antenna is strongly biserrate with long fasciculations.

This species can usually be recognized by the streaky gray and tan forewing with the long white extension of the inferior reniform spot. It is most likely to be confused with Trichocerapoda strigata, a species with which it flies in the fall. Trichocerapoda oblita is larger, paler, and has more prominent forewing spots. The reniform spot of T. strigata usually lacks the long white spike towards the base that is typical of T. oblita.

This species is widely distributed throughout much of western North America in dry grassland and rangeland habitats.  In the Pacific Northwest, it is common to abundant in open juniper woodlands and dry sagebrush steppe at low elevations east of the Cascades.  Epidemic outbreaks have been observed in severely disturbed and over-grazed rangelands of central Oregon.

This species is found in the American West. The range extends to California, Colorado and New Mexico, and the southern Canadian Prairie Provinces from the Northwest.

Powell and Opler (2009) describe this species as bivoltine, but the Northwest populations are almost exclusively single-brooded and only fly during the fall. Most of our records are from September. It is a nocturnal species that comes to lights.