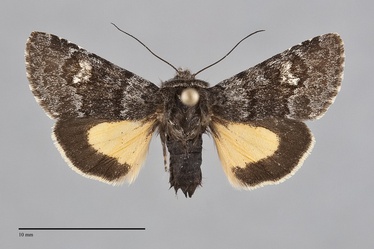 Coranarta luteola is a distinctive small (FW length 11 - 12 mm) noctuid moth that flies during the day in northern bogs. It has black forewings and banded yellow and black hindwings. The forewing is charcoal gray, darkest in the median area, with a hoary appearance due to scattered lighter scales. The transverse lines are single, black, and relatively smooth. The subterminal line is pale and is preceded by a darker shade. The orbicular and reniform spots are black; the latter is prominently filled with white scales except for the center which remains as a black vertical line. The hindwing is bright yellow with a sharply demarcated black marginal band and white fringe. The head and body are charcoal gray and the abdomen is black. The male antenna is filiform.

This species is only likely to be confused with Coranarta macrostigma, a similar species that has a similar northern distribution. The hindwing fringe of C. macrostigma is weakly checkered, clear white in C. luteola, and the dark filling of the reniform spot is more extensive than that of C. luteola.

This species is widely distributed in boggy arctic tundra across Alaska and Canada, extending southward throughout the Rocky Mountains in subalpine peat bogs and wet meadows at high elevations near timberline.

Coranarta luteola is found in northern and central British Columbia in our region. It has been collected as far south as Mt. Lolo near Kamloops. Lars Crabo observed an alpine moth that probably was this species at Perkins Peak in the British Columbia Coast Range near Kleena Kleene in 2010.

This species occurs across the boreal zone of North America from Alaska to Labrador. The range extends south to Minnesota and Wisconsin in the Midwest and Maine in the East. It is found south in the Rocky Mountains to Colorado.

This species is a foodplant specialist feeding on laurels (Kalmia microphylla and Kalmia polifolia) in the Ericaceae.

Adults are strictly diurnal. They visit flowers and are particularly fond of the flowers of bog rosemary (Andromeda polifolia). They fly during the spring, later at high altitudes, and have been found during June in our region and from mid-May to mid-July across the entire North American range (Lafontaine et al. 1987).