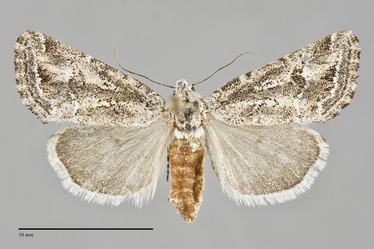 Escaria clauda is a fairly small noctuid moth (FW length 11–13 mm) from dry steppe habitats southern Oregon with powdery streaked gray, cream, and ochre forewings. The forewing has a slightly pointed apex. The color is cream to pale tan, variably suffused with gray and powdery black scales, darkest in the anterior cell, below the cell, and along the proximal two-thirds of the posterior margin and lightest in the cell and fold. The terminal area is gray in all but the palest specimens. Ochre yellow is also variable, evident in the paler areas but usually not in the cell or fold. The basal and antemedial lines are powdery dark gray, incomplete and difficult to trace. The postmedial line is gray, double, also powdery and incomplete but filled with white in some specimens, sinuous, close to the lateral reniform spot. The subterminal line is cream to light ochre, more conspicuous than the other lines, offset toward the base on the costa and diffuse and mildly irregular elsewhere. It is preceded by diffuse black spots on the mid-forewing. The terminal line is dark gray. The fringe is pale tan to gray, checkered with gray in dark specimens. The orbicular spot is oval, varying from absent to a few black scales, to a well-defined pale spot with a thin black outline. The reniform spot is powdery black, variable from a complete outline to lacking an outline, kidney-shaped, filled with gray. The claviform spot is black, thickest anteriorly, small, variable from absent to a few black scales to complete. The hindwing is dark gray-tan, gradually darker toward the outer margin, with a faint discal spot and thin dark gray terminal line at the base of the white fringe. The head and thorax are cream to powdery gray. A flat-topped frontal tubercle is present. The eye is covered with fine hairs. The male antenna is filiform with long fasciculations.

This species can be recognized by its small size, triangular forewing shape, and powdery gray, light tan, cream, and ochre forewing color. It is similar in size and shape to Afotella cylindrica and Hadenella pergentilis, but the former species is dull gray and the latter is orange-brown and gray unlike E. clauda. Escaria homogena, a Great Plains species that barely enters the Northwest in Montana and Idaho, is similar but more even gray-tan in color with a W-mark on the mid-subterminal line, straight in E. clauda. These species can be separated easily by locality in the Northwest.

This is a desert species.  It barely enters the Pacific Northwest in very dry, hot sagebrush steppe habitats in southern Oregon.

Escaria clauda is limited to south-central Oregon in the Pacific Northwest.

Escaria clauda occurs in the Great Basin as well as in southern California outside of our region.

This species flies during the summer and has been collected from late June through August in and near our region. It is nocturnal and comes to lights.