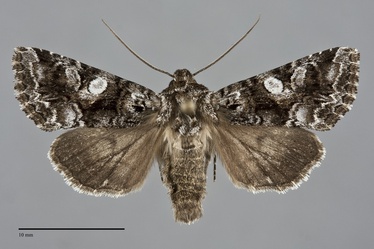 Hadena siskiyou is a dark, nearly black, small to medium-sized noctuid (FW length 13 - 15 mm) that is restricted to southwestern Oregon and flies during the spring and summer. Its forewing has a mottled white pattern dominated by a large, round orbicular spot. The apex of the forewing is slightly pointed. The forewing ground color is dark brownish gray with whitish gray between the three spots in the central median area, light gray near the base, and mottled blue-gray in the subterminal and terminal areas. A black wedge precedes the subterminal line at the costa and a short black basal dash is present. The antemedial line is double, gray, with gray-brown filling. The median line is dark, evident on the costa and near the trailing margin. The postmedial line is double with black inner and dark gray outer components filled with the ground color anteriorly and white from the fold to the trailing margin. It is smoothly convex toward the outer margin around the reniform, becoming more scalloped and concave toward the base from below reniform spot to the trailing margin. The subterminal line is white, offset below the margin and then slightly irregular except for a moderate W-mark on veins M3 and CuA1 at mid-forewing. It is preceded by long black wedges between the veins near the W-mark. The terminal line is a series of black flat triangles between the veins. The fringe is checkered white to light gray and dark gray-brown. The orbicular spot is relatively large, round to oval in shape, thin black in outline and filled with pure white with a faint darker central area. The reniform spot is kidney-shaped, black with lighter white inner line and filling of pale gray to gray-brown. The claviform spot is thick, nearly solid black at least near its tip, and filled with the ground color near the base, usually reaching the postmedial line. The hindwing is medium-dark slightly brownish gray with a wide gray marginal band, discal spot, and postmedial line. The fringe is two-tones with brown-gray basal and distal white parts. The head and collar are dark gray-brown with light and dark stripes on the distal collar. The thorax is grizzled gray-brown with dark margins on the medial tegulae. The eye surface is hairy. The male antenna is bipectinate.

This species is narrowly endemic to dry habitats in northwestern California and western Oregon.  In the Pacific Northwest, it occurs on rocky, barren ridgetops at high elevations in the Siskiyou Mountains and along the western summit of the Cascades.  At lower elevations in western Oregon, it occurs in dry, open grasslands, oak savanna, and in openings of mixed hardwood-conifer forests.

Hadena siskiyou is found in southwestern Oregon in the Siskiyou Mountains north to Eugene in the Willamette Valley.

This species has been collected outside of Oregon in northwestern California.

No information is presently available regarding larval foodplants of this species, but it is probably a foodplant specialist feeding on herbs of the pink family (Caryophyllaceae) such as Silene spp. based on closely related species.

This species is single-brooded and the adults fly in late spring at low elevations and during the summer in the mountains. They have been collected from mid-May to late July. It is nocturnal and comes to lights.