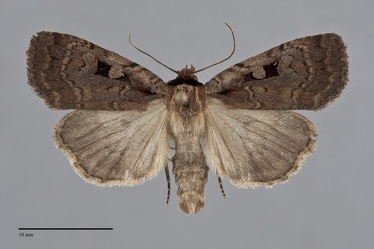 Eueretagrotis perattentus is a broad-winged, small to medium-sized noctuid moth (FW length 15 - 17 mm) with a broad black collar and brown forewing with a black cell between the spots. The forewing ground color is dark brown with a faint purplish to reddish tint, slightly lighter anteriorly and darker toward the outer margin. The transverse lines are double with slightly lighter filling. The postmedial line is weakly scalloped, especially the medial component. The subterminal line is pale, usually preceded by a dark shade and occasionally by a series of thin black wedges. A short, black basal dash is present. The orbicular and reniform spots are fairly large, but are mostly evident due to black filling of the adjacent cell. The hindwing is pale luteous gray with faintly darker discal spot, scalloped median line, and subterminal band. The head and most of the thorax are brown like the forewing ground color, but the collar is thick and black. The abdomen is gray. The male antenna is filiform.

This species is similar in general color and pattern to Agnorisma bugrai and Pseudohermonassa tenuicula with which it occurs in the eastern portion of the Pacific Northwest. It can be told from A. bugrai by its scalloped, rather than smooth, postmedial line and from P. tenuicula by the presence of a dark collar, lacking in P. tenuicula. Its brown forewing color is similar to that of A. bugrai but lighter than that of P. tenuicula while the light hindwing is more like that of the latter species.

This species is widely distributed across Canada and through the Rocky Mountains in boreal spruce-fir forests or birch and quaking aspen hardwood forests.  In the Pacific Northwest, it is rare and sporadic, and narrowly confined to spruce-fir or mixed hardwood-conifer forests at higher elevations in the Rocky Mountain region.

Eueretagrotis perattentus is found in forested habitats in southern British Columbia and the Blue Mountains of northeastern Oregon in our region. It is undoubtedly more widely distributed in northern Idaho.

This species is found in boreal forests across North America on both sides of the Canada-United States border from Newfoundland and Pennsylvania to the Pacific Northwest. It ranges further south in the Appalachian Mountains to North Carolina in the East and in the Rocky Mountains to east-central Arizona in the West.

This species feeds on hardwoods such as huckleberries (Vaccinium spp.) in the Ericaceae and cherries (Prunus spp.) in the Rosaceae.

Adults are found in the summer months with records from late June through August in our region. It is probably single brooded. The adults are nocturnal and come to lights.