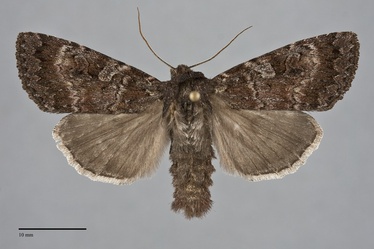 Eurois astricta is a large cutworm moth (FW length 20 - 25 mm) that flies in forests throughout the Pacific Northwest during the summer. It has dark gray-brown forewings with a red-brown to purplish hue marked with a busy pattern or lines and spots. The ground color is dark gray-brown with a distinct red to purple-red flush that is most evident in the median area and as filling of the lines. The basal area, region between the orbicular and reniform spots, and the area between the postmedial and subterminal lines are usually darkest, and the filling of the lines and the terminal area are lightest. A black line connects the spots across the lower cell. A black shade and series of large wedge-shaped black marks precedes the subterminal line and are largest opposite the cell and the fold. The lines black and double. The antemedial line is nearly straight. The postmedial line is gently excurved toward the costa and is scalloped, especially the inner component. The subterminal line is irregular, evident due to the black shading and wedges that precedes it. The terminal line is a series of black crescents between the veins. The orbicular spot is black, incomplete toward the costa, and usually an oblique circle or oval in shape. It is filled with light gray, occasionally only with the ground color. The reniform spot is black and fairly large, heart-shaped or irregular with an extension toward the base at the lower margin. It is usually filled with darker scales than the orbicular spot but usually light gray at the periphery. The claviform spot is black. The hindwing is dark brown gray, sometimes lighter at the margin, with a faint gray discal spot but often lacking a postmedial band, and has a slightly lighter gray to whitish fringe. The head and thorax are uniform dull dark brown-gray. The male antenna is biserrate.

Eurois astricta is most similar to Eurois nigra and commonly flies with it, but can be distinguished from it by the color of the forewings and hindwings. The forewing of E. astricta is brown with extensive red-brown color, while that of E. nigra is black with at most a few orange to red patches. The hindwing of E. astricta is dark brown-gray with an off-white fringe, while that of E. nigra is pale whitish gray with gray dusting, discal spot, and submarginal band with a distinct white marginal area and a pure white fringe. Eurois astricta could potentially be confused with a couple of less closely related dark moths. Polia rogenhoferi is an uncommonly collected species from high elevation forests in British Columbia. It is dark gray with a slight brown tint but none of the red-brown color of E. astricta. Also, it has fine hairs on the surface of the eyes like other members of the tribe Hadenini that Eurois and other members of the tribe Noctuini lack.

This species is widely distributed in boreal spruce-fir forests or hardwood forests of birch and quaking aspen across Canada and Alaska, extending southward throughout the higher mountains of western North America.  In the Pacific Northwest, it is common to abundant in spruce-fir forests at high elevations along the summit of the Cascades, and in mixed hardwood-conifer forests or ponderosa pine forests at middle elevations in the Rocky Mountain region.  An epidemic outbreak of this species was observed in the Blue Mountains of northeastern Oregon during a warm dry year.  It also occurs at high elevations in spruce-fir forests along the summit of the Siskiyou Mountains in southwestern Oregon.

Eurois astricta is widely distributed in forests of the Pacific Northwest. It is most common at middle elevations in the mountains. It is not found in xeric steppe habitats.

Eurois astricta is widely distributed in the boreal and montane portions of North America. The range extends from Alaska to Labrador in the north. The southern limit is southern New York in the East, southern Wisconsin in the Midwest, northern New Mexico in the Rocky Mountains, and southern Oregon on the West Coast.

This species is a generalist feeding on many hardwoods including huckleberries (Vaccinium spp.) in the Ericaceae, alders (Alnus spp.) and birches (Betula spp.) in the Betulaceae, maples (Acer spp.) in the Aceraceae, Viburnum spp. in the Caprifoliaceae, and quaking aspen (Populus tremuloides) in the Salicaceae.

This species is single-brooded and flies in summer to early fall. The Pacific Northwest records are from late June to mid-September. It is nocturnal and comes readily to lights.