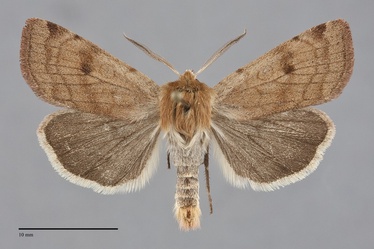 Paradiarsia littoralis is an ochre-brown to orange-brown, small to medium-sized moth (FW length 13 - 17 mm) that flies in wet forests in the northern and eastern parts of the Pacific Northwest. It has a bipectinate male antenna and a forewing with red-brown lines and spots and gray filling of the lower reniform spot. The forewing is smooth ochre to orange-brown with thin darker veins. The posterior margin, median shade, and area preceding the subterminal line are slightly darker orange-brown and a spot at the costa before the subterminal line is darker gray or red-brown. The transverse lines are orange-brown, single. The antemedial line is uneven while the postmedial line is smoothly convex toward the margin, sometimes slightly undulating near the reniform spot or slightly scalloped. The subterminal line is pale and slightly uneven. The spots are similar orange brown to gray. The orbicular spot is round to oval, filled with the ground color and a faint central ocellus. The reniform spot is filled with the ground color except the inferior portion which is gray. The claviform spot is faint or absent. The hindwing is dark gray with a contrasting ochre or red-brown fringe. The head and thorax match the forewing color. The male antenna is bipectinate.

This species can usually be identified by its yellow to orange-brown color and smooth lines. Apamea inficita is similarly colored and flies with P. littoralis. It is larger, has a scalloped postmedial line, and the male antenna is much narrower.

This species is widely distributed across Canada and throughout the Rocky Mountains in moist spruce-fir and quaking aspen forests.  In the Pacific Northwest, it is common in open ponderosa pine forests or mixed hardwood-conifer forests at middle elevations in the Rocky Mountain region, and is particularly common in the Blue Mountains.

Paradiarsia littoralis is found in boreal forest and mountain habitats in British Columbia, northern Washington, and eastern Oregon. It is probably more widely distributed in the mountains of Idaho. This species has not been found south of the Methow Valley in the Cascade Range.

This species occurs across the boreal North American Continent from eastern Alaska to Labrador. The range extends south to Pennsylvania in the east, central Wisconsin in the Midwest, northern New Mexico in the Rocky Mountains, and extreme north-eastern California in the West.

This species is a broad generalist, and feeds on both hardwoods and herbaceous vegetation.

Adults fly from late May to early August in our region and have a single generation per year. This species flies at night and comes to light. Females are much less commonly collected than males.