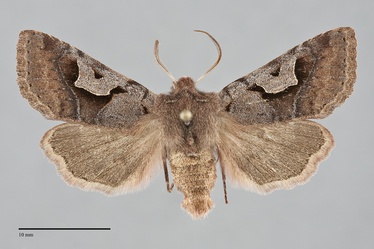 Acerra normalis is a distinctive medium-sized (FW length 16 - 18 mm) light purplish-gray moth that flies in early spring. It has large, fused orbicular and reniform spots, both of which open toward the costal margin and that are surrounded by rich dark brown in the median area. The forewing has a slightly pointed apex with a smoothly convex lateral margin. The ground color is medium-dark brown with a slight purplish cast. The basal line is dark brown and is located near the wing base. The antemedial line is thin, ochre, and strongly angled from near the wing base along the costa to the mid-wing at the trailing margin. The postmedial line is purple-gray. It is sharply drawn toward the base at the costa, strongly convex toward the outer margin opposite the anterior portion of the reniform spot, and then strongly angled toward the trailing margin where it ends near the antemedial line or is fused to it near the margin. The subterminal line is pale, sometimes preceded by darker brown in the subterminal area or at the costa. The terminal line is a series of spots between the veins. The large orbicular and reniform spots are white or ochre and filled with the ground color. They are broadly fused and are open toward the costa, forming a butterfly-shaped pale spot against a background of rich velvety dark brown or red-brown in the median area. The claviform spot is obsolete. The hindwing is dark brown-gray with barely darker gray discal spot and postmedial line and a gray to reddish fringe. The head and thorax are purplish brown with a faint red-brown edge to the collar and a weak median crest. The eye is covered with fine hairs. The male antenna is strongly bipectinate.

This species is distinctive and is unlikely to be confused with other moths in our area. It can be distinguished from similar sized brown Orthosia species with which it flies by the broadly fused forewing spots surrounded by dark brown. Species of Stretchia have similar fused forewing spots but they are filled with white or light gray scales, not brown as in A. normalis. Most Stretchia specimens are smaller than A. normalis.

This species is common in all forest habitats throughout much of the Pacific Northwest.  It is particularly abundant in coastal rainforests and mixed hardwood forests at low elevations west of the Cascades, but is also common in oak woodlands, oak savanna, and in dry brushlands of the Siskiyou region.  It also occurs in mixed hardwood-conifer forests and spruce-fir forests at middle to high elevations in the Cascades and Rocky Mountain regions, and is common in dry, open ponderosa pine forests east of the Cascades.

This species is found north to southern British Columbia in our region. It is found across the southern province at least to the Selkirk Mountains. The eastern limit of its distribution across the international border is similar, with records from northern Idaho, eastern Washington and northeastern Oregon. The range is more restricted to western Oregon near the border with California.

The range extends south through western California from our region.

Adults are on the wing during the early spring from March to mid-May. It is nocturnal and comes to lights.