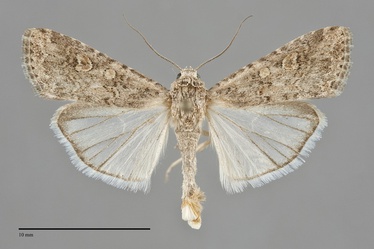 Spodoptera exigua, the beet armyworm, is a small pale gray brown noctuid moth (FW length 11 - 16 mm) with a fairly nondescript pattern that includes a pale round obicular with a gray to orange central ocellus and translucent white hindwings with a dark veins and dark marginal band at the anterior outer margin. The forewing is relatively narrow and long. It is slightly mottled medium-dark gray-brown with a subtle pattern of double gray lines filled with the ground color. The subterminal and/or terminal areas are mottled slightly darker gray in some individuals. The median line is gray, thin and wavy. The irregular pale subterminal line is preceded by long gray wedges between the veins in some specimens, strongest in the mid-wing and usually absent from the costal and trailing margins. A series of gray dots between the veins forms the terminal line. The small oval or round orbicular spot is very thin and black but prominent due to pale whitish or slightly yellow filling and a gray or burnt orange central ocellus. The reniform spot is thin, black outer and light inner components, and is filled with the ground color. The claviform spot absent or thin and gray. The hindwing is slightly shiny and translucent pearly white with dark gray veins and a thin gray marginal band that is widest at the anterior outer margin. The hindwing fringe is white. The head and thorax are sandy gray-brown. The male antenna is filiform.

This species can usually be identified by its small size, narrow nondescript forewing other than a pale orbicular spot with faint gray or orange center, and pearly white hindwing. No other species in our area has this combination of characters.

This species is an exotic introduction from southeast Asia that has become widely distributed as a major agricultural pest species throughout the southern United States.  It is migratory and not a permanent resident in northern climates, and most records in the Pacific Northwest appear to be long-distance strays.  It is mostly restricted to disturbed agricultural areas.

This species is much less common in the Pacific Northwest than in many parts of the country. It is most commonly found in western Oregon, but also occurs in western Washington and in the eastern parts of both states. It has also been collected in southern Idaho.

This species was introduced into North America in the late 1800's and was first discovered in Oregon (Powell and Opler  2009). It has since become widespread across the Continent. It is most common in the southern half of the United States, ranging to southern Ontario and New England in the East, to Nebraska in the Great Plains, and to the Pacific Northwest along the West Coast.

This species is a generalist feeding on many kinds of herbaceous vegetation, and is a major agricultural pest species on many crops across the southern United States.

Adults occur most commonly in late summer and fall in our region. It is likely that it is unable to overwinter in our area. It is nocturnal and comes to lights.

This is a major pest species feeding on many agricultural crops across the southern United States, but is of little economic importance in the Pacific Northwest.