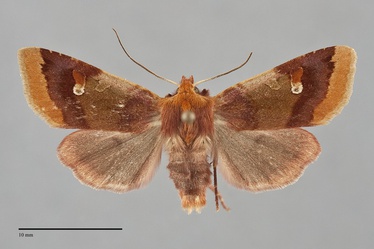 Agrochola pulchella is a striking wine-red, orange, and tan small to medium-sized moth (FW length 14–16 mm) that flies west of the Cascade Range during the fall. The forewing is fairly long and has a slightly pointed apex. It is banded in vivid hues: deep rose to dark wine in the basal and antemedial areas, olive-tan in the median area proximal to the median line, dark wine red from the median line to the subterminal line, and dark orange in the terminal area. The smooth lines are mostly evident as the transitions between colors; only a portion of the excurved brown antemedial line is evident as a separate marking. The dark wine-red median line extends through the anterior reniform spot and is bent 90° at the lower end of the spot. The subterminal line is slightly irregular below the apex and nearly parallel to the outer margin elsewhere. The fringe is pale orange. The thin orbicular spot is pale olive tan, an obliquely-oriented oval. The reniform spot is ovoid or kidney shaped, outlined in pale scales, light red in the upper two-thirds and white at the lower end, filled with rose to wine red in the upper portion and tan to white in the lower end. No claviform spot is evident. The hindwing is shiny pink, immaculate to darkly suffused with gray except near the margin, with a pink to gray discal spot. The fringe is light pink. The head and thorax are orange brown with strong pink to red suffusion. The antenna has a white base (scape) and proximal dorsum; that of the male is beaded.

This colorful moth can be identified readily by its orange and wine-red forewing with white outline of the lower reniform spot. It is unlikely to be confused with any other species in our area.

This species is widely distributed along the West Coast in moist forest habitats.  In the Pacific Northwest, it is common in coastal rainforests and mixed hardwood forests at low elevations west of the Cascades.  It occurs in oak savanna, oak woodlands, and mixed hardwood-conifer forests at low to high elevations in the Siskiyou region of southwestern Oregon.  It also occurs in high elevation conifer forests along the summit of the Cascades. It is least common in open ponderosa pine forests or oak woodlands along the east slope of the Cascades where it is usually found along creeks and rivers.

Agrochola puchella is found throughout the western part of the Northwest as far north as Vancouver Island, British Columbia. It is also widespread in forested habitats east of the mountains from central Oregon to southern British Columbia. Its eastern limit is in the Idaho Panhandle.

This species is found predominantly near the Pacific Coast. It occurs in western California to the vicinity of San Francisco Bay as well as in the northern Sierra Nevada.

This species is a foodplant generalist feeding on many kinds of hardwoods, particularly Salicaceae, Betulaceae, and Fagaceae.

The flight season of A. pulchella is during the fall, most commonly during September and October. It is nocturnal and comes to lights.