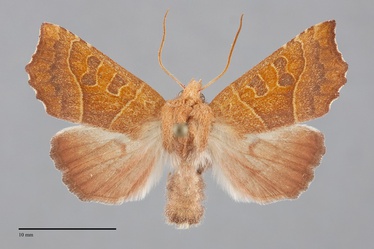 Eucirroedia pampina is a beautiful, bright golden-orange, medium-sized moth (FW length 17–19 mm) that occurs in southeastern British Columbia, north-eastern Washington, the Idaho Panhandle, and western Montana during the fall. It has a scalloped and apically pointed forewing that is bright golden, with a slightly darker pink or purplish hue along the posterior margin and in the subterminal area. The antemedial lines are very smooth, dark red-brown adjacent to the median area and light orange opposite the median area. The antemedial line is nearly straight, angled slightly toward the outer margin from the costa. The postmedial line is bent toward the base near its costal origin, perpendicular to the adjacent margin lateral to the reniform spot and below the spot. The subterminal line is light orange, patchy, irregularly scalloped. No basal, median, or terminal lines are present. The fringe is dark orange with light orange edge on the concave segments. The orbicular and reniform spots are outlined in light orange and are filled with purplish orange. The orbicular spot is a large upright oval and the reniform spot is large and figure-eight-shaped. The hindwing and fringe are copper-colored, whitish anterior margin and base, with slightly darker discal spot and veins. The head and thorax are uniformly of the forewing ground color with a median crest on the thorax. The male antenna is biserrate.

This species can be readily identified by its distinctive forewing shape and color. Other fall-flying moths with the colors of autumn leaves are smaller and have smooth outer margins.

This species is widely distributed in moist forest habitats throughout eastern North America.  In the Pacific Northwest, it occurs in mixed hardwood-conifer forests at middle elevations, but may also occur in riparian zones along creeks and rivers at lower elevations.

Eucirroedia pampina is found in eastern British Columbia, extreme north-eastern Washington, the Idaho panhandle, and western Montana in the Pacific Northwest. It has been collected most commonly in the southeast corner of British Columbia. It is probably more widespread in the eastern parts of Washington, Idaho, and Montana than the isolated records suggest since this part of the region has been collected rarely during the fall.

This species is found across southern Canada to eastern North America. The range in the East extends from Nova Scotia to Florida and Mississippi.

This species is a generalist feeding on many kinds of hardwoods, particularly Rosaceae, Salicaceae, and Aceraceae.

Adults fly during the fall. Most of the Pacific Northwest records are from mid-August to mid-September. They are attracted to lights. This moth comes readily to sugar baits based on fermenting fruit in eastern North America, but it is not known whether this is also true in our region.