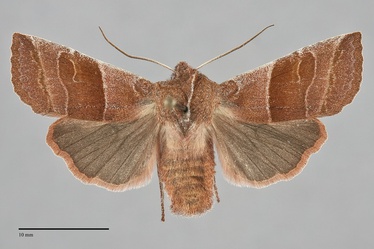 Eupsilia fringata is a medium-sized moth (FW length 15–17 mm) that flies in foothills and canyons during the fall and early spring. It has alternating gray-brown and brown areas on the forewing separated by smooth, pale lines. The forewing has a pointed apex, slightly falcate in some specimens, and a slightly scalloped outer margin. The ground color of the most common form is brown in the basal, median, and distal subterminal areas and hoary gray-brown elsewhere. The costa is frosted pale gray. An unusual angled pale straight line near the subterminal line separates these colors in the distal subterminal area. A striking red form in which the colors are dark rose and lighter pink is uncommon. The ordinary lines are pale and weakly darker than the ground. The basal line is strongly excurved. The antemedial line is slightly concave toward the base or undulating, slightly angled toward the base from the costa. The postmedial line is drawn a short distance toward the base on the costa and is weakly S-shaped elsewhere, convex outward on the anterior wing and concave basad on the posterior half. The subterminal line is pale, irregular. No median or terminal lines are evident. The fringe is light brown, red-brown in the red form. The reniform spot is narrow, halfmoon-shaped, outlined in pale, strongest on the lateral side, and filled with the ground color or a slightly grayer shade. The orbicular and reniform spots are absent. The hindwing is medium-dark gray with a dark thin terminal line and slightly paler pink-tinted fringe. The head and thorax are uniform brown to gray-brown, red-brown in the red form. A pointed crest is present on the anterior thorax. The male antenna is biserrate.

This moth can usually be recognized by its moderate size and pattern of brown or reddish and grayer areas separated by smooth pale lines, including an "extra" line in the distal subterminal area. It is closely similar to Eupsilia devia, an eastern species that reaches its western limit in British Columbia. Eupsilia fringata is larger, has a more heavily "frosted" appearance on the gray portions of the wing, and has a red form that does not exist in E. devia. The antemedial and postmedial lines come closer to each other in E. fringata than in E. devia, but this difference is slight.

This species is rare and sporadic in the Northwest.  Although the habitat is not well known, it appears to be most common in mid-elevation foothills and canyonlands.

This species has been found in California and Utah to the south of the Northwest region. Most of the California records are from the Sierra Nevada and the southern part of the state.

This species is known to feed on both herbs such as asters (Aster spp.) and goldenrod (Solidago spp.) in the Asteraceae, and hardwoods such as Salicaceae and Rosaceae.

The adults of E. fringata eclose from pupation in the fall and fly briefly before hibernation. They emerge in the spring to mate and lay eggs. Over half of the Northwest records are from the fall, an unusual pattern for many "winter moths" which are typically found most commonly in the spring. Eupsilia fringata is nocturnal and comes to lights. It has also been taken at sugar bait in eastern Washington.