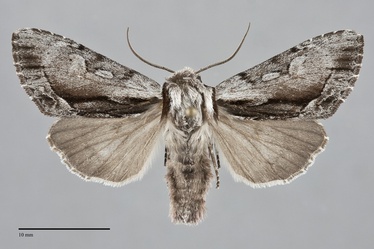 Hyppa indistincta is one of three similar Hyppa species with gray forewings with brown and black posterior markings that appear to curve anteriorly on the postmedial line. It is a medium sized moth (FW length 18 - 20 mm) that flies at moderate to high elevations during the summer. The anterior and middle portion of the forewings are medium gray, while the posterior aspect and terminal area opposite the cell are dark gray and brown. A thick slightly indistinct strong basal dash extends to the antemedial line, and a similar black bar continues across the median area through the fold. Long black marks are present on the trailing margin from the base to the postmedial line and three black lines are located between veins terminal area opposite the reniform spot of which the longest extends proximal to the subterminal line. Black shading is present on both sides of the subterminal line at the anal angle. The basal, antemedial, and median lines form oblique black lines across the costa, fading at the anterior cell. The antemedial line is also deeply zig-zagged posterior to the fold. The postmedial line is smoothly arches across the distal wing, is pale gray anterior to M3 and is black and white from this vein to 1A+2A. The white subterminal line is reduced to a short sinuous mark near the anal angle. The orbicular and reniform spots are variably outlined in black, often only evident as light gray filling. The orbicular spot is an elongate oval and the reniform spot is kidney-shaped. The claviform spot is not visible separate from the median bar. The hindwing is gray, darker toward the margin, with darker gray diffuse discal spot, postmedial line, and veins. The hindwing fringe is white with a gray base. The head and thorax are light gray with a black transverse bar across the distal collar and dark brown on the lateral tegulae. The male antenna is weakly bipectinate.

This moth can be recognized as a Hyppa by the light gray anterior forewing with relatively inconspicuous markings, contrasting dark gray posterior forewing, and the black and white postmedial line that curves anteriorly but fades at the level of the cell. The male antenna of H. indistincta is the most narrow of the Hyppa species and is weakly bipectinate, only 2.5x as wide as the shaft. Females can be difficult to separate from Hyppa contrasta and Hyppa brunneicrista with which it flies at some localities. The forewing of H. indistincta is more uniform gray than those of the other species, lacking red-brown and orange markings, and has less strongly zig-zagged markings near the outer margin.

The range of this species extends from the mountains of western Alberta and the Pacific Northwest south to the Sierra Nevada, California.

Hyppa indistincta has been reared from mountain heather (Phyllodoce sp.) in the Ericaceae (Crumb 1956). It is probably a generalist feeding on both hardwoods and herbaceous vegetation like closely related species.

The adults fly during summer and have been collect from early June to early August in our area. They are nocturnal and come to lights.