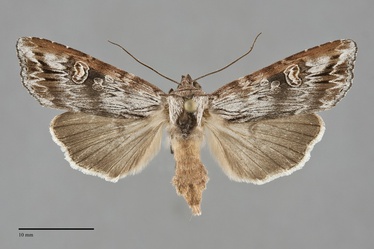 Lithomoia germana is a large, streaky gray moth (FW length 21–24 mm) that flies in conifer forests during the fall. It has an orange brown costa, two small inconspicuous orbicular spots, and large cream and black-filled reniform spot. The forewing is long, has a pointed apex, and a scalloped outer margin. The color is streaky steel-gray, darkest in the median and terminal areas, with a warm orange-brown costa distal to the antemedial line. Some similar warmer tones are also present near the subterminal line. A black dash-like mark is present at the base of the posterior margin. Many of the veins are dark. The lines are dark gray, strongly waved, and toothed. The basal line is only visible on the costa. The antemedial line is fairly diffuse but visible on the anterior wing, obscure further posteriorly. The median line is a broad sooty shade across the wing. The postmedial line is saw-toothed lateral to the cell, with extremely long teeth below the reniform spot that are very faint in most specimens. The subterminal line is whitish gray, irregular with a sharply-defined W-mark to the outer margin on M3 and CuA1. It is preceded by two long black wedges at the W-mark and a gray shade that forms diffuse black spots on the anterior wing in some individuals. The terminal line is a series of gray spots, inconspicuous. The fringe is dark gray. The orbicular spot is divided into two similar-size small spots, one anteromedial and the other posterolateral, outlined in black and filled with light gray and darker ocelli. The reniform spot is large, broadly kidney-shaped, outlined in black and filled with cream and an inner gray oval that is strongest medially. No claviform spot is evident. The hindwing is smoky brownish gray with a diffuse gray discal spot and postmedial line. The hindwing fringe is white. The head and collar are tan with thin black lines across the face and distal collar. The rest of the thorax is dark gray-brown centrally and lighter gray on the tegulae. A dark tuft is present on the posterior thorax. The male antenna is strongly biserrate.

This moth can be recognized by its steel-gray and orange-brown forewing with streaked pattern of strongly waved lines and the double orbicular spot. It could potentially be confused with Lithophane georgii, a species with which it flies in the fall. This moth lacks warm tints on the costa, has a black-rimmed reniform spot that lacks pale filling, and has a black dash. Several species of Xylena, another genus which members fly in the fall, resemble L. germana in size, shape, and gray color. They have a pale tan streak on the distal forewing that L. germana lacks.

Larva is smooth, dark brown with a broad white lateral band.  It is illustrated by Miller and Hammond (2003).

This species is widely distributed in moist forests and boggy habitats.  In the western part of the Pacific Northwest, it is found in both coastal rainforests at low to middle elevations, and in boggy coniferous forests at high elevations in the Cascades.  It is most common in spruce bogs. It occurs in similar habitats at lower elevations in boreal forests further north and east.

Lithomoia germana is found in boreal forests at least as far north as west-central British Columbia and as far south as the Idaho Panhandle. The range extends south along the Pacific Coast to Douglas County, Oregon.

This species is a foodplant generalist feeding on many types of hardwoods including Betulaceae, Ericaceae, Rosaceae, and Salicaceae.  In the Pacific Northwest, it is most common on huckleberries (Vaccinium spp.) in the Ericaceae.

The flight period of L. germana is the fall, beginning in late August and lasting through September. It is nocturnal and comes to lights. It has also been collected at sugar bait in coastal Washington. This moth rolls its wings around its body and rests with the abdomen lifted above the substrate to resemble a dead twig.