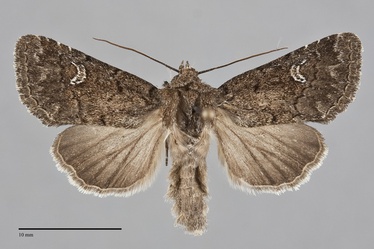 Properigea niveirena is a small to moderate-sized moth (FW length 13–16 mm) that flies west of the Cascades and in the Blue Mountains during the summer. It has a dark gray forewing with a white-rimmed crescent-shaped reniform spot. The forewing has a long apex. It is nearly even dark gray, usually lighter mottled gray in the terminal area. The basal, antemedial, and postmedial lines are black. The basal line is irregular. The antemedial line is slightly slanted toward the outer margin and is toothed toward the base on the veins. The median line is absent or very faint and diffuse dark gray. The postmedial line is weakly toothed on the veins, drawn strongly toward the base on the costa and weakly on the trailing margin and is weakly S-shaped elsewhere. The subterminal line is light tan-gray, jagged. The terminal line is a black. The fringe is gray. The orbicular spot is absent or a small oval filled with the ground or slightly lighter gray. The reniform spot is strongly crescent-shaped, outlined in black outer and pure white inner lines, often incomplete at the anterior and posterior ends, and is filled centrally with a dark gray crescent. The claviform spot is absent. The hindwing is medium-dark gray, darker toward the margin, with dark veins and terminal line. The fringe is white with a gray base. The head and thorax are dark gray. The male antenna is filiform.

This moth can be recognized by its dark gray color with a halfmoon-shaped white reniform spot. It is unlikely to be confused with other species in our region. The range of the similar species Properigea suffusa (Barnes and McDunnough) extends to northern California. It should be sought in southern Oregon.

This species is found sporadically in a number of different habitats, most often in dry open forest with clearings or rocky outcrops.  It is common in mountain meadows and on rocky ridgetops at high elevations in the Siskiyou Mountains and near the summit of the Cascades.

Properigea niveirena is found predominantly in the Cascade Range and lowland of western British Columbia, Washington, and Oregon and is known from as far north as Vancouver Island. It is only known from a few sites east of the Cascade summit, including in the Methow Valley of north-central Washington and the Blue Mountains in southeastern Washington.

The range of this species extends south through California to the border with Mexico, then east to New Mexico through southern Arizona.

No information is presently available regarding larval foodplants of this species, but it is suspected to feed on herbaceous vegetation.

The flight period of P. niveirena is the summer, most commonly in July and early August. It is a nocturnal species that comes to lights.