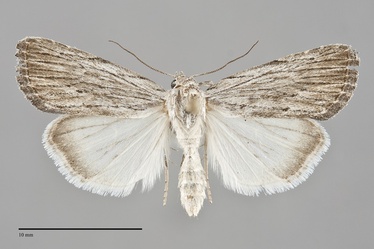 Catabena lineolata is a small gray noctuid moth (FW length 12 - 13 mm) that flies east of the Cascade Range throughout the year. It has a pale gray forewing with a relatively simple pattern of longitudinal streaks, and a white hindwing with a gray margin. The central veins are dark bordered on each side by pale scales. The distal wing is slightly darker brownish gray. The lines are nearly absent. Oblique traces of the antemedial and postmedial lines are present on the costa. The zig-zag pattern of the postmedial line can be made out in a few individuals. The terminal line is evident as short gray lines between the veins. The fringe is the same color as the terminal area. There are no traces of the spots. The hindwing is white with a slight pearly sheen. The distal wing is gray. A thin gray terminal line is present. The fringe is gray at the apex, white elsewhere. The head and body are light gray, with fine transverse striations on the collar. The male antenna is filiform.

This species can be identified by its small size, normal wing shape, and light gray streaked pattern. It is most similar to Sympistis orbicularis, a species that flies in the deserts of southeastern Oregon in our region. This species differs in that it has distinct forewing spots, lacking in C. lineolata. Sympistis major, a more generally distributed species, is similar in that it lacks forewing spots but a larger medium-sized moth with darker gray forewings and hindwings.

Catabena lineolata is found east of the Cascade Mountains as far north as southern British Columbia. It has been most commonly encountered near the Columbia and Snake Rivers in Washington.  The distribution is spottier in Oregon where it occurs in the southwest corner and eastern parts of the state.

This species is found across North America. It appears to be most common in California and the southwest, with additional western records from Alberta and Texas. The eastern populations are restricted to a narrow north-south distribution in the Midwest, Pennsylvania to Maine, and adjacent southern Canada.

This species feeds on various herbaceous plants including Verbena species (Verbenaceae) and goldenrod (Solidago spp.) in the Asteraceae.

Catabena lineolata has a very long flight period in our region suggesting the presence of multiple broods. It has been collected from April to October. This species is nocturnal and comes to lights.