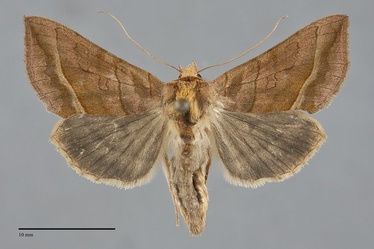 Diachrysia aereoides is an orange-brown, medium-sized moth (FW length 15 - 17 mm) that flies in the western part of our region and sporadically further east during the summer. Its forewing has a smooth brown postmedial line that is bordered by pale greenish yellow. The forewing has a slightly hooked tip and a flange at the anal angle. The color is orange-brown with a slight olive tint, darker and shinier on basal side of the transverse lines, most prominently in the subterminal area. The lines are smooth, dark orange brown. The basal and antemedial lines are similar, nearly straight. The median line is faint, slightly more oblique than the other lines and most evident on the posterior wing. The postmedial line is smoothly arced with the convex side laterl. It is followed by a pale greenish yellow line than is faint at the costa but evident elsewhere. The subterminal line is dark, sinuous and forming a "W" mark with the tips of the teeth in the interspaces below veins M2 and M3. The terminal line is very thin. The fringe is slightly grayer than the adjacent terminal area. The suborbicular and reniform spots are outlined in orange-brown and filled with the ground color; the orbicular spot is nearly obsolete. Both of these spots are elongate and upright. The reniform spot is weakly indented on the lateral side with the anterior end slightly projected toward the wing margin. The hindwing is gray-brown, strongly suffused with smoky dark gray, with darker gray discal spot and veins. The hindwing fringe is light orange-brown with a weakly checkered basal row. The head, collar, and median thorax are orange-brown, while the lateral thorax is gray-brown. The posterior thorax bears loose tufts of long scales, with additional tufts on the dorsal abdomen. The male antenna is filiform.

This species can be identified by its slight hook-tipped forewing with even orange-brown color, thin darker lines and spots, and the greenish yellow line following the postmedial line. The pattern with a suborbicular spot but no significant orbicular spot is unusual.

This species is relatively rare.  It occurs in low-elevation moist meadows and riparian zones along creeks and rivers. It is found in marshes near Ocean Beaches in western Washington.

The North American range of D. aereoides is fairly large. It occurs across southern Canada to Nova Scotia, reaching central Alberta and north-central Manitoba. The range extends south to North Carolina and Tennessee in the Appalachian Mountains, Colorado in the Rocky Mountains, and northern California in the West.

This species is a foodplant generalist feeding on a wide variety of herbaceous plants.

The flight period of D. aereoides is the summer, with records from late June through August in our region.  It is nocturnal and comes to lights.